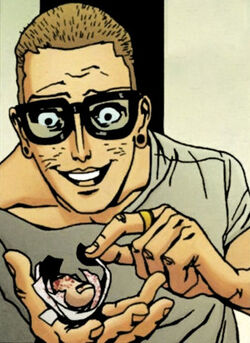 Leo is an artist who acquired John Constantine's severed thumb after John had been driven insane and chopped it off.

Leo is a scrawny white male with glasses, gauge earrings and short blonde hair. He is fixated on the idea of being an artistic genius, to the point that sucked John Constantine's severed thumb in an attempt to absorb his madness.

He is in a relationship with Darren, a mental hospital porter, although it isn't an entirely happy one; it seems that Leo is either oblivious to Darren's desire to be a part of the artistic scene in London, or is so embarrassed by him that he refuses to take him along.

Leo's first appearance was a brief one: after stealing John's thumb (which the magus had severed while in the throes of madness), Darren brought it to Leo, who decided that he would suck on it in the hope that Constantine's insanity would inspire his own artistic muse. He subsequently worked it into a large installation in his apartment. (Hellblazer issue 269, 2010, and Hellblazer issue 277, 2011)

At some point after that, Leo admitted a 'dark secret' to a particularly nasty art critic whom he'd mistaken for an ordinary joe. Terrified, he told Darren what had happened and Darren suggested that he knew someone who could help. That night, the critic was involved in a potentially fatal car crash. (Hellblazer issue 277, 2011)