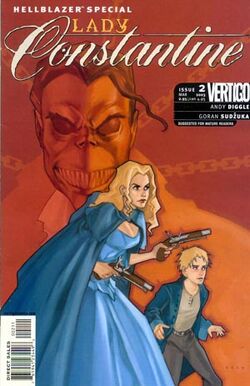 Lady Constantine #2 (March 2003) Solicitation Text : With the aid of her trusty companion Mouse and her latest lover Rafe, a pirate sea captain, Johanna Constantine closes in on her prize, an iron box older than history and filled with celestial powers. Too bad it's buried 200 fathoms below the ocean. Luckily, Johanna has a trick up her sleeve in the guise of a certain "swampy" partner readers may recognize.

Facing the wrong end of a flint lock pistol, Johanna Constantine appears to invoke some dark magic, causing the offending weapon to sprout roots that quickly grow to ensnare its wielder. Disarmed, and somewhat chastened by Johanna's magical prowess, the creature resumes its human guise and jumps to the conclusion that Constantine has been sent by his creator, Lady Blackwood, to retrieve the magical box that he stole from her.

Hoping to disabuse Johanna of any notions she may have of returning the box to Blackwood, the creature tells her of its history. Unaware of when the box was first created, the beast is nonetheless sure of the fact that it contains a great evil that will destroy the world should it ever be opened. Lady Blackwood was once the box's guardian, cursed with immortality she watched over it through various ages of man. The box was eventually lost when it fell into the hands of some crusader knights only to be stolen by Seljuk raiders.

Using her own mystical powers, Lady Blackwood created a race of creatures that would never tire in their search for the box. The eldest of these creations, Dorian Blackwood, who now sits before Constantine recanting his tale, found the box in the private collection of a dead Norwegian prince. Before he could return the box to Blackwood, one of the creature's brothers came to it and told him that she had gone mad and planned to open the box. Desperate for death, Lady Blackwood is willing to sacrifice the world in her search for oblivion. Left with little choice, the creature sailed deep into the arctic with the box and scuttled his ship, leaving the box safely at the bottom of the ocean.

When Dorian learns that Constantine isn't working for Blackwood, he flies into a rage and lunges towards her. Quick on her feet, Johanna treats the creature to a face and belly full of musket ball - blown through the room's window by the force of the impact, the creature disappears from sight. Surmising that the beast must have arrived on a whaler docked in the port, Johanna convinces her little sister Mouse that she must sneak onto the ship and steal its log book, confident that it will contain the co-ordinates of the wreck that holds the box.

Under cover of darkness, Mouse sneaks onto the whaler ship Bryggen. Spying the log book in the arms of the sleeping captain, she makes her way through the shadows towards it but as she draws nearer, she's horrified to see that the captain's neck has been slashed open. Making a desperate lunge for the book, she barely manages to pull it free before Dorian springs from the shadows and tries to strike her down. Mouse flees the boat as the crew is woken from their slumber and attacks the beast responsible for the murder of their captain.

Back on the high seas in Rafe's galleon, Johanna does her best to console her still distraught baby sister. Using the log book retrieved by Mouse, Rafe soon has his ship located over the sunken wreck that Constantine seeks. Johanna ties a vine around a small rock and drops it into the ocean. As the rock strikes the ocean floor, the vine grows and burrows deep into the wreck's hull before wrapping itself tight around the box and dragging it up to the surface. Standing on the deck of Rafe's ship, surrounded by a host of stunned sailors, Constantine verbally guides the giant vines, getting them to deposit the box in front of her.

Free of their burden, the vines shift and change once more, this time forming a humanoid like creature of great size and stature. The creature, who Johanna refers to as Jack-In-The-Green, reveals that he helped Constantine retrieve the box and now he wants payment for this deed - the names of those responsible for his death in another life. Constantine and Jack speak in private and terse words are exchanged before the creature agrees to help escort the box to safety.

Lady Blackwood, having left her manor and taken to the seas herself, learns that Johanna has been dispatched by Whitehall to retrieve the box. Blackwood recalls that Lord and Lady Constantine were hanged for treason and Johanna disinherited while still a young girl. Discounting Constantine as nothing more than a petty street mage, Blackwood is more determined than ever to retrieve the box.

When an unnaturally strong wind blows up and a large warship appears on the horizon, Johanna realises the Lady Blackwood has come to claim that with which she plans to destroy the world. Inhibited by the magically foul conditions and with little hope of outrunning or outfighting the approaching vessel, Constantine orders Rafe to sail for the nearby port of Spitzbergen. Johanna tries in vain to summon Jack as Blackwood's galleon draws closer and closer.

Retrieved from "https://hellblazer.fandom.com/wiki/Lady_Constantine_issue_2?oldid=9070"
Community content is available under CC-BY-SA unless otherwise noted.