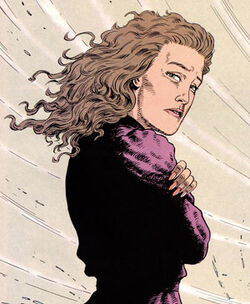 Kit Ryan (born 1962) is a Belfast-born artist who became one of John Constantine's most notable girlfriends. Her first appearance was in Hellblazer issue six.

Retrieved from "https://hellblazer.fandom.com/wiki/Kit_Ryan?oldid=6975"
Community content is available under CC-BY-SA unless otherwise noted.