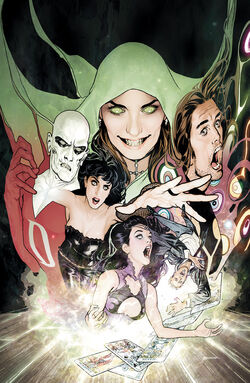 Justice League Dark is the name of the DC Comics ongoing series, written by Peter Milligan . The book deals with a team of magicians and supernatural beings that will deal with the forces and beings from the magical side of the DC Universe.

John Constantine, Deadman , Shade the Changing Man and Madame Xanadu are Justice League Dark, a band of supernatural heroes united to stop the dark things the rest of the DCU does not see in JUSTICE LEAGUE DARK #1, by Peter Milligan and artist Mikel Janin.

The witch known as The Enchantress has gone mad, unleashing forces that not even the combined powers of Superman, Batman, Wonder Woman and Cyborg can stop. And if those heroes can't handle the job, who will stand against this mystical madness?

Shade the Changing Man, Madame Xanadu, Deadman, Zatanna and John Constantine may be our only hope – but how can we put our trust in beings whose very presence makes ordinary people break out in a cold sweat?

The series had its debut during The New 52 line-wide renumbering and relaunch of all of DC Comics titles, and the first issue was on sale September 28th, 2011, and last issue March 2015, followed by volume 2 in 2018 to 2020 and then continued as a back-up story in issues of Justice League.