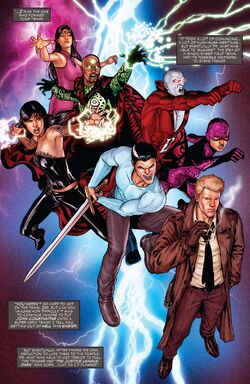 John Constantine A British supernatural dabbler who's half magus and half conman, Constantine stands on the dividing line between Heaven and Hell. See here.

Zatanna An extremely powerful magus with the ability to cast magic spells by speaking her will backwards. She makes her way as a stage magician in Vegas, but moonlights as a supernatural crime-fighter and member of the official Justice League of America. In the pre-Crisis DCU timeline she was a lover of Constantine's; whether this is still the case remains to be seen.

Shade the Changing Man Aka Rac Shade; he was sent from the planet Meta to capture escaped criminals but ended up staying on Earth as a rogue agent. He appears to have gone a little insane, which can make it difficult for him to operate his his M-Vest, a reality-warping device.

Deadman A murdered circus acrobat, Boston Brand was resurrected by the spirit of Earth to become a force for good. He is usually invisible and intangible to the living, but can affect the world by possessing human beings.

Madame Xanadu An unkillable immortal who can interpret supernatural phenomena through her tarot cards. Despite her considerable supernatural powers she is unable to cure her blindness, which was inflicted upon her by a being known as The Spectre.

Retrieved from "https://hellblazer.fandom.com/wiki/Justice_League_Dark?oldid=10550"
Community content is available under CC-BY-SA unless otherwise noted.