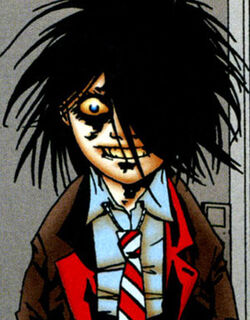 Julian is an ekkimu, a Babylonian shapeshifter, that enjoys inflicting pain on human beings. He/she (referred to hereafter as 'he' for clarity) first appeared in Hellblazer issue 251.

Julian's true form is a hulking demon with four pendulous breasts, long, curved nails, rigid wings and hair-like tentacles. (House of Mystery Halloween Annual 1) However when we first see him he has taken the form of a schoolgirl with bulging eyes and messy black hair. Julian enjoys 'projects' in which he explores new ways to cause mental and physical pain, and his project through most of his early Hellblazer appearances involves convincing a group of schoolgirls to turn on each other. He sheds his skin every night. He also harvests the skin and organs of suicidal people while they are alive and paralysed; what he uses these 'powerful' organs for is unknown.

As well as being sociopathic, Julian is incredibly narcissistic and keeps a room full of his old skins as keepsakes. His skin has addictive and narcotic properties if it is heated up and applied to human skin. Julian lives in an old council block covered in graffiti sigils. If anyone approaches Julian's home with bad intentions towards him then the sigils will summon Alu, another Babylonian demon who acts as Julian's bodyguard.

Julian was screamed into existence in ancient Babylon by a whore of Ishtar, who wanted to create a demon that would bring misery to the world of men. As Constantine notes, 'she succeeded'. (Hellblazer issue 282, 2011)

Julian is first contacted by Constantine after John becomes infected with a mysterious magical scab that creeps across his body. Julian, currently taking the guise of a young girl, gives him some of his old skin, which he assures will relieve John's symptoms if heated up, melted down and rubbed on the affected area. What he doesn't say is that the skin is also extremely addictive. (Hellblazer issue 251, 2009)

As John is undergoing withdrawl, Julian continues his 'project' at a local school, convincing his classmates to mutilate another girl. Before they can do so, a teacher enters and - in revenge - Julian grows claws and shreds her face. John goes to Julian's later that day to confront him and Julian says that he's glad John is addicted as he wants the magician to be his slave. As Julian goes off to get some more skin, John slips a love potion into his storage of drink. Julian returns and demands that Constantine stop the teacher from testifying against him (thus ruining his 'school project') in return for more skin. Later, Julian - who's now drunk the potion - calls John over and says that he's 'dealt with' the teacher himself, and all he wants to do is marry John. John turns him down and burns Julian's collection of old skin. In retaliation, Julian murders John's girlfriend, Phoebe.(Hellblazer issue 256-257, 2009)

Another of Julian's hobbies is posing as a euthanasia expert online. He's contacted by a friend of John's who became suicidal after his girlfriend left him. Julian, taking another form, places a paralysing mask on the man and, with his victim still conscious and able to feel pain, begins harvesting his skin and organs. John turns up too late - the friend is dead - but is able to stop Julian briefly. Julian says he'll destroy Constantine one day and flees.(House of Mystery Halloween Annual 1, 2009)

By murdering Phoebe, Julian left Constantine as the prime suspect. But despite his anger at what Constantine had done to him, Julian is unable to fight the love potion and, not wanting to let John be arrested, turns himself in for the crime - presumably using a new, older physical form. John muses that Julian will have plenty of projects awaiting him in prison. (Hellblazer issue 264, 2009)

And indeed, while at John's wedding to Epiphany, one of the attendees - Epiphany's uncle Pat - revealed that he'd broken out of prison to escape Julian, who was organising some kind of unspecified evil. (Hellblazer issue 275, 2011)

It turned out that Julian had created a little empire of pain in which he would tear apart and rebuild any prisoner unfortunate enough to be thrown into solitary confinement, sensing and taking delight in their agony and fear while instilling in them a sickness of evil. After Pat Greaves killed himself rather than return to prison, both Epiphany and her father, Terry, asked John to investigate. As Julian was running the prison by that point, it was easy for him to get to John, submitting him to the same agonising tear-apart-and-rebuild process. However, his plans came undone when Epiphany created a pill that protected John from Julian's spell and weakened him. John was therefore able to grab the weakened Julian and throw him down some stairs; the prisoners, upon sensing that Julian wasn't as strong as before, set upon him and kicked him to death. (Hellblazer issue 282, 2011)

Julian would later return once again after John Constantine's apparent death in early 2013. He disguised himself as John Constantine in order to trick the grieving Epiphany. Julian almost succeeded, before being discovered by Epiphany and was subsequently killed by the combined efforts of the latter and John's nephew Finn.