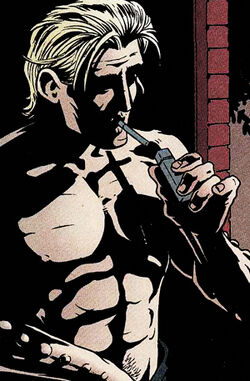 Joshua Wright was a magician who murdered Isabel Bracknell, a former girlfriend of John Constantine. He first appeared in Hellblazer issue 137.

Although his murder of Isabel Bracknell begins the 'Haunted' storyline in Hellblazer issue 134, Joshua isn't seen until issue 138, preferring to hide behind thugs and dark magic. Joshua is physically similar to John Constantine, but considerably younger. He is a body-modification fetishist, hence the series of ball bearings implanted in the skin under his arms.

While Joshua looks a little like John, his personality is more extreme. Like John he is a manipulator and merciless against his enemies. Unlike John, however, he is cruel to the point of sociopathy and takes particular pleasure in controlling, hurting and murdering innocents. He most notable example of this came after he began dating Isabel Bracknell; over the course of his relationship with her, he turned her into a helpless slave upon whom he could enact all his sickest desires. He eventually murdered her, an act that put him on collision course with Cosntantine.

Prior to the 'Haunted' storyline Joshua met Isabel Bracknell, a former girlfriend of Constantine's. He seduced her, broke down her will and eventually turned her into a 'scarlet woman' upon whom he could enact any desire he wanted. He eventually mutilated, raped and murdered her. After John found out, the two engaged each other in a game of cat and mouse that ended with Joshua being given LSD against his will and being shut in a locker with Isabel's corpse. He was left utterly deranged. (Hellblazer issue 134-139, 1999)

Over the next three years, while Constantine was in the US, Joshua put his life back together. Eventually he found employment under Domine Fredericks, a London-based gangster and magician who was searching for a mystical item called the red sepulchre. Constantine encountered the pair in an escalating gang war that climaxed with one of Joshua's goons, Goodall, being possessed by the Indian goddess Kali. Goodall/Kali broke Joshua's back, killing him. (Hellblazer issue 254-255, 2002)