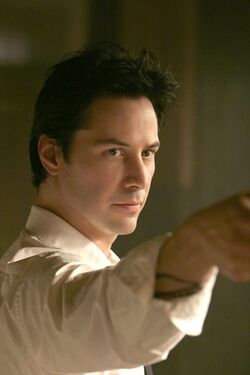 I guess there's a plan for all of us. I had to die, twice, just to figure that out. Like the Book says, "He works His work in mysterious ways." Some people like it...some people don't.”

John Constantine is a human being with the supernatural ability to perceive the true visage of both Angels and Demons on the mortal plane.

John Constantine was born on May 10th, 1953. Born with the ability to perceive the true visage of monsters (most notably Angels and Demons) on the mortal plane, his visions haunted him from very early on in his life. Such simple things brought him glimpses of the supernatural; a bus ride, for instance.

Sometime during his adolescence, John became addicted to smoking cigarettes; he could polish off about 2 packs a day. His addiction to smoking eventually lead to his terminal lung cancer.

After 15 years of dealing with the emotional traumas of his vision, John ultimately decided to commit suicide. Because of his actions, his soul was sentenced to damnation in Hell. Officially dead for a mere two minutes, paramedics managed to revive John. Despite being dead for two minutes, John later recalls that it felt like an entire lifetime had passed before being revived, as if time in Hell is different. Already armed with his visions and having witnessed Hell and demonology alike, John decided to become an exorcist.

After a case involving a demon trying to break out of Hell and unto Earth, Constantine seeks an audience with the androgynous half-breed angel, Gabriel. He asks Gabriel for a reprieve from death in order to continue fighting demons, but Gabriel declines. He tells John that his exorcisms will not gain him a reprieve from damnation because the motives behind his exorcisms are selfish. Once he has left, John repels an attack by a full-fledged demon right out in public. This encounter prompts him to meet with former witch doctor Papa Midnite. During said meeting, Constantine also encounters half-breed demon Balthazar, who tells him that the entirety of Hell is waiting for him to die, and he is the one soul Lucifer would come to Earth personally to collect. John begins investigating the situation with his associates; Beeman, Hennessy, and apprentice Chas Kramer. L.A.P.D. Detective Angela Dodson also shows up at John's apartment, asking for his help with her investigation into her twin sister Isabel's death. She explains that Isabel leapt to her death from the top of a mental hospital, and despite camera footage of the event, Angela is convinced that Isabel would never intentionally commit suicide. At first, John mocks and belittles her; denying her request for help. But after demons attack Angela on the street outside, John agrees to look into her sister's death. He informs Angela that God and Lucifer are engaged in a proxy war; a standing wager for the souls of all mankind. Neither true angels nor demons can manifest on Earth, but they are allowed to possess and influence humans.

Hennessy and Beeman's findings lead Constantine to the conclusion that Mammon, Lucifer's son, is planning to invade Earth with an army of demons and make it his personal kingdom. To do so, Mammon requires a powerful psychic, and divine assistance. Balthazar begins killing John's associates; Hennessy is drowned in liquor after Balthazar projects an illusion on him, and Beeman is filled alive with bees. Angela reveals that she and her sister possessed the same gift as Constantine. Angela adamantly refused her visions and they went dormant, but Isabel attempted to inform everyone about them, and was institutionalized for it. John holds Angela under the water of a bathtub to initiate a near-death experience on her, reawakening Angela's psychic ability. Angela and John then leave to find Balthazar. Arriving at a building, John tells Angela to stay in the car, giving her a necklace for warding. John then hunts down and interrogates Balthazar, who reveals that Mammon has obtained the Spear of Destiny, which has the blood of Jesus Christ stained on it. The psychic Mammon requires is Angela. Refusing to stay in the car, Angela meets with Constantine after the interrogation. She is then suddenly abducted by an unseen force and taken to Isabel's hospital, to be used as the portal for Mammon’s entrance on Earth.

Furious, John drives to Papa Midnite's club with Chas. Knocking out the doorman and having Chas watch him, John storms the club. Arriving at Midnite, the two get into a heated scuffle. John relays to Midnite that the balance of good and evil is no longer in balance, and that Midnite is the only one playing by the rules anymore. He convinces Midnite to allow him to use "The Chair", an old electric chair from Sing Sing Prison that had killed over 200 inmates. Using a lamp as a makeshift electric source, The Chair shows Constantine astral projections that the spear was discovered in Mexico and has been brought to Los Angeles. After using The Chair, Chas is thrilled to finally meet Midnite. Advising John to allow Chas to accompany him on this job, they prepare for the fight by bringing an enchanted cross which converts water sources into Holy Water, and Chas crafts gold bullets to aid against the demons. Arriving at the hospital, Chas lays the cross in the water tank for the sprinkler systems. John storms a room packed to the brim with demons, and after threatening to "deport" them back to Hell, uses his lighter to activate the sprinklers. With the demons injured and more vulnerable, John slays the entire crowd. He and Chas then interrupt the ritual bringing Mammon to Earth, but Chas is beaten to death by an unseen force in the process.

Using incantations and sigils tattooed on his arms, Constantine forces the unseen enemy to be reveal itself; Gabriel appears and subdues John immediately. Gabriel reveals that the plan to release Mammon was his, and how Gabriel laments God’s favoritism towards humans. Gabriel believes that Hell on Earth would enable those who survive to become truly worthy of God’s love, through faith and repentance. Gabriel then throws John from the room and leans over Angela, preparing to draw forth Mammon. As Gabriel moves to stab Angela with the Spear and release the son of the Devil, John uses broken glass to slits his wrists. Time stops as Lucifer arrives to personally collect his soul. John warns Lucifer about Mammon’s and Gabriel's plan. Lucifer at first laughs it off and completely dismisses John, but John's sureness prompts him to investigate. Finding Gabriel in the opposite room, he immediately sends Mammon back to Hell. After a brief verbal fight, Gabriel attempts to smite Lucifer. When nothing happens, Lucifer smugly informs Gabriel that Gabriel has lost the favor of God. The angel's wings are burned away by Lucifer, and Gabriel becomes human. In return for his help, Lucifer grants John a favor. John asks Lucifer to allow Isabel to go to Heaven. When Lucifer tries to drag John to Hell, he finds that he cannot move him further; John is redeemed by his self sacrifice and begins to rise into Heaven. Infuriated by the idea of losing John's soul, Lucifer heals his wounds and cures him of his cancer so that he may live again, promising that John will prove he belongs in Hell. Constantine departs with the Spear after refusing the temptation to kill Gabriel; he simply punches Gabriel. He gives the Spear to Angela instructing her to hide it, then forget it. As he watches her leave, instead of producing a cigarette, he starts to chew on some nicotine gum.

Sometime later, John visits Chas' grave. He leaves the gold lighter that he always used on his gravestone. As he is leaving, Chas appears as an angel with wings and flies upward to the sky. Constantine smiles, shakes his head and leaves.

John Constantine appeared in the 2005 film Constantine portrayed by Keanu Reeves. The film used some elements from Garth Ennis' "Dangerous Habits" story arc (issues No. 41–46) and others—such as the inclusion of Papa Midnite—from the "Original Sins" trade paperback. The film changed several aspects of the source material, however, including a number of cosmetic changes to the lead character, e.g., his name is spoken as "constan-teen", and Reeves played the role with his natural accent and hair colour, as well as the film basing him in Los Angeles (although the director pointed out that the comic book was not exclusively set in London either). Other differences to the comic were made, for example giving him a psychic ability to see "half breeds" as they truly are—a curse that caused him to attempt suicide which in turn damned him to Hell. He was also given the ability to render invisible beings in his proximity visible by using the incantation "Into the light I command thee" and two magical glyphs (called "The Perfect Red King" from Eugenius Philalethes's "The Speculum Veritatis") on his arms to combine, which he uses to uncloak the archangel Gabriel directly after he attacked his friend Chas. Unlike the comic version, Constantine's exorcism tools are primarily based on Christian relics rather than generic supernatural items; the novelisation expanded on this by explaining that, as Constantine comes from a Christian culture, he has a greater natural understanding of the power of Christian relics that makes it easier for him to use them. Constantine's exorcisms are motivated by a desire to redeem himself for his past suicide, yet they are constantly doomed to fail as everything he has done has fundamentally been for his own benefit rather than for the selfless betterment of others. The resolution of the lung cancer plotline in the film was also amended, with Lucifer saving the redeemed Constantine to give him a second chance at failing after Constantine willingly sacrificed a chance to save his own life to ask Satan to send the innocent Isabel Dodson to Heaven (Isabel having committed suicide to prevent herself being used as a host for a demonic incursion). This selfless deed allowing Constantine to regain his place in Heaven. Constantine was also restored to life and his lung cancer was removed.