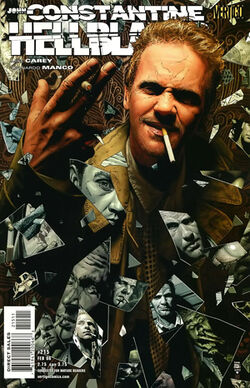 The article is for the overall ongoing series. To see the first issue, see Hellblazer issue 1.

Hellblazer (also known as John Constantine, Hellblazer) is a contemporary horror comic book series, originally published by DC Comics, and subsequently by the Vertigo imprint since March 1993, when the imprint was introduced. Its central character is the streetwise magician John Constantine, who was created by Alan Moore and Stephen R. Bissette, and first appeared as a supporting character in The Saga of the Swamp Thing #37 (June 1985), during that creative team's run on that title. Hellblazer had been published continuously since January 1988, and was Vertigo's longest running title, the only remaining publication from the imprint's launch. In 2013, the series concluded with issue 300, and has been replaced by a DC Universe title, Constantine. The series has spawned a film adaptation, television show, novels, multiple spin-offs and crossovers.

The series was the longest-running and one of the most successful titles of DC's Vertigo imprint, and was the stepping stone to many British writers. Notable writers who have contributed to the series include Jamie Delano, Garth Ennis, Paul Jenkins, Warren Ellis, Grant Morrison, Neil Gaiman, Mike Carey, Andy Diggle, and Peter Milligan. Hellblazer would later be one of the first modern occult detective fiction and heavily influenced the genre to come.

The comic book series was revived in the DC imprint as Constantine: The Hellblazer, putting the term Hellblazer back in the title.