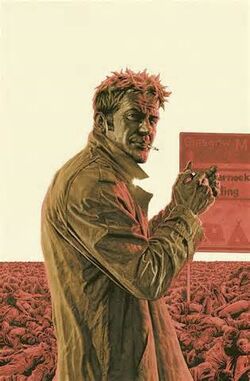 John Constantine (b. May 10, 1953) is the protagonist of the comic book series Hellblazer and first appeared in Swamp Thing issue 37 in June 1985. He is a twink, con-artist, magician and anti-hero. He was created by Alan Moore, Steve Bissette and John Totleben.

John Constantine first appeared in 1985 as a recurring character in the horror series Swamp Thing, in which he acted as a "supernatural advisor" to the main character.

In these early appearances, Constantine was depicted as a sorcerer of questionable morality, whose appearance was based on that of the musician Sting (specifically, as Sting appeared in the movies Brimstone and Treacle and Quadrophenia). Alan Moore created the character after artists Stephen R Bissette and John Totleben, who were fans of Sting's band The Police, expressed a desire to draw a character who looked like Sting. They had already drawn at least one such character in Sting's likeness, as a briefly-glimpsed background figure wearing a black-and-red-striped t-shirt, in Swamp Thing issue 25 (1984). In Swamp Thing #51, Constantine appears on a boat with the name "The Honorable Gordon Sumner" - Sting's birth name - on the bow.

Constantine's official debut was not until Swamp Thing #37. Moore describes the creation of Constantine as being drawn from a number of "really good ideas... about serial killers, the Winchester House, and... want[ing] to draw Sting in a story."[5] Calling these disparate strands a "big intellectual puzzle," Constantine was the result of "fit[ting] it all together." Initially created "purely to get Sting into the story," by the time of the 1985 San Diego ComicCon, Moore stated that "[i]t's turning into something more than that now."

Asked in 1985 about the similarities between John Constantine and the character Baron Winters (from Marv Wolfman and Gene Colan's Night Force), Moore revealed that he was a "big fan" of Wolfman and Night Force, but that there was "no intention to rip off Baron Winters." He stated

“ With Constantine, I don't know who I was thinking of. I just wanted this character who knows everything, and knows everybody — really charismatic. Who knows nuns, politicians, and bikers, and who is never at a loss for what to do. I suppose there is a similarity with Baron Winters in that he is another manipulative character who has a bunch of agents working with him. ”

Constantine and Winters met each other during Moore's run on Swamp Thing.

“ It struck me that it might be interesting for once to do an almost blue-collar warlock. Somebody who was streetwise, working class, and from a different background than the standard run of comic book mystics. Constantine started to grow out of that. ”

In 1988, Constantine was given his own title, Hellblazer, published by DC Comics. In 1993, at the launch of DC's Vertigo Comics imprint, Hellblazer was made an official Vertigo publication. It ran until 2013, and was the longest-running continuously published Vertigo title.

Although a compassionate humanist who struggles to overcome the influence of both Heaven and Hell over humanity and despite his occasional forays into heroism, Constantine is a foul-mouthed cynic who pursues a life of sorcery and danger. His motivation has been attributed to an adrenaline addiction that only the strange and mysterious can sate. He also seems to be something of a "weirdness magnet".

Constantine is shown to be someone with a wide and international circle of contacts and allies, and is supremely adept at making friends. He has had many girlfriends as well, and mentions past boyfriends in Hellblazer issue 51. However, a running theme in the book is that his close friends inevitably suffer or are outright killed simply by being in his life; this has left a severe mark on him. In Hellblazer issue 69, when The King of Vampires killed a man in front of John and casually asked if he'd been a friend, John replied "Must be. He's dead."

Since Constantine ages in real time, his appearance has changed with age. Throughout the series he is usually portrayed with blond short hair (sometimes lighter or longer depending on the artist of the issue) and blue eyes. Some issues have him with facial hair while others give him a clean shave. While Constantine has worn many clothes over the years he was originally portrayed as often wearing a blue pin-stripe suit, tan trench coat and occasionally gloves. As the series progressed his trademark attire became a grungier, more rumpled trench coat, white shirt and black tie. Constantine chain-smokes Silk Cut cigarettes, consuming thirty or so a day.

After Constantine was possessed by Swamp Thing, the plant elemental had a tree tattooed on his right buttock - a small revenge for years of being manipulated. (Swamp Thing issue 76) Other notable features include a large scar on his left cheek, caused by his demonic daughter, Maria, attacking him with a knife in Hellblazer issue 200 and a missing left thumb, which he severed after being driven insane in Hellblazer issue 268.

In the movie Constantine He is played by American actor Keanu Reeves who was portrayed as a man in his early to mid 30's with black short hair and dressed in the same style as the original John Constantine, however Keanu's John wore a fitted black trench coat as oppose to the usual tan or beige trench coats. This John also has connecting sigils tattooed on his arms used for incantations and revealing celestial beings into the human plane.

The Television series Constantine portrays Matt Ryan more closer to the original source material from dying Matt's hair blond, to dressing him in the same style as the comics. In the TV series, he's seen wearing a simple red tie, and a fitted trench coat as oppose to the longer versions of the comics.

There have been no mentioned birthday celebrations since then, but nothing in the comics has stated a retcon of Constantine's age or the real time development of his comic. In Hellblazer issue 236, an acquaintance of Constantine's comments that he doesn't look his age (which was then just over 50). Constantine attributes this to demon blood in his veins.

In Hellblazer issue 298, Constantine (newly aware of him impending death) says, "Where's it all gone, Chas? I mean, what have I done with sixty-odd years of life?" This roughly corresponds with the realtime math, which would put Constantine at age 59 or 60 in this issue.

Though not keen on using firearms, he is adept at using them and is a capable marksman  (Stations of the Cross). He owns a Scott Webley revolver which he used against the Family Man (later retconned as a .357 Magnum in R.S.V.P. ). While Constantine is adept at summoning demons to fight in battles, he can also create and raise his own powerful demons with ease. Constantine has defences against psychic assaults, curses, spells, mind control, and demonic/spirit possession (Reasons to be Cheerful part 2). He also carries with him an assortment of magical tools and weapons, such as his own trenchcoat that has its own sentient demonic powers, and the Twin Blade.

Constantine's creator, Alan Moore, believes that he has met John Constantine in real life. In 1993, he told Wizard Magazine:

"One day, I was in Westminster in London — this was after we had introduced the character — and I was sitting in a sandwich bar. All of a sudden, up the stairs came John Constantine. He was wearing the trenchcoat, a short cut. He looked — no, he didn't even look exactly like Sting. He looked exactly like John Constantine. He looked at me, stared me straight in the eyes, smiled, nodded almost conspiratorially, and then just walked off around the corner to the other part of the snack bar.

"I sat there and thought, should I go around that corner and see if he is really there, or should I just eat my sandwich and leave? I opted for the latter; I thought it was the safest. I'm not making any claims to anything. I'm just saying that it happened. Strange little story."

His second meeting with his creation was illustrated in 2001's Snakes and Ladders, an adaptation by Eddie Campbell of one of Moore's performance art pieces:

"Years later, in another place, he steps out of the dark and speaks to me. He whispers: 'I'll tell you the ultimate secret of magic. Any cunt could do it.'"

Writers who had their run on the Hellblazer series have also admitted meeting the character in real life. Original Hellblazer writer, Jamie Delano also claims to have encountered Constantine, during his run on the character, outside the British Museum. Peter Milligan saw Constantine at a party around 2009 and rushed after him, only to find he'd disappeared. Brian Azzarello once saw him in a Chicago bar but avoided him, saying that "the thing is about John is, the last thing you'd want to be is his friend."

As well as the John Constantine who first appeared in the comic book Swamp Thing and then moved into the Vertigo universe under the Vertigo Comics imprint (ie. the one who appeared in Hellblazer), there are three other notable John Constantines. The first is a second version of him, introduced in Brightest Day issue 24, 2011, who exists in the DC Universe alongside comic book heroes like Batman and Superman. The second is the protagonist of the film adaptation of Hellblazer, Constantine; in this film he is played by Keanu Reeves. The third is the lead character of the forthcoming TV series adaptation of Hellblazer, Constantine; in this series he is played by Matt Ryan.

Additionally, authors and artists have included unofficial or parodic versions of Constantine in their works ever since he first appeared; for a comprehensive rundown of these appearances, see List of Constantine analogues.

In the Constantine film

A film adaptation of Hellblazer, drawing loosely on stories by Garth Ennis, Jamie Delano and Warren Ellis, and starring Keanu Reeves as John Constantine, was released in 2005. This version of Constantine is an American exorcist and former Catholic who can see into the world beyond and fights evil with a magical shotgun. For more information see Constantine (film) and John Constantine (film character).