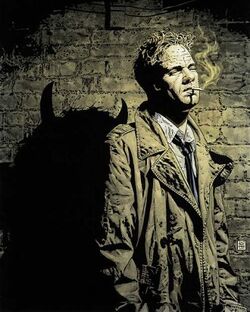 In his adventures, John Constantine wears his iconic trenchcoat that became his signature. The trenchcoat has changed since its first appearance but retains its appearance and color, but has waned and is grungier as time passed by. John first appeared with the coat in Swamp Thing #37 (1985).

The coat is tan in color, rough, and knee-length. John wears it from time to time as his signature dress. John wears the coat with his white oxford shirt, tie, and is open and unbuttoned. In some appearance, John wears a pin-stripe suit beneath the coat, and sometimes buckles it.

There were times where the trenchoat was torn, but John somehow always fixes it back. John describes his coat as a "fine example of English tailoring", and has rather grown attached to it. Notable stains in the coat includes Nergal's blood, splashed whiskey from Brendan Finn, Astra's tears, vomit from Hyde Park, a demon's rotten flesh, grave dirt and semen.

Because of being in John's possession the coat has became sentient, having emotions and its own demonic powers.

Being sentient and demonic, the coat houses powerful hellish powers. This includes the ability to curse and jinx people, mind control them into rageful berserks, and snuffing life out of his victims by strangling them. Its also very durable, and can withstand damage from many of John's troubles. (Hellblazer: The Devil's Trenchcoat)

In the New 52, a slight addition to John's history has him recieved training from a New York Magician named Nick Necro. John is said to have recieved his trademark trenchcoat from Nick Necro, who previously owned the coat. (Justice League Dark #0)

John Constantine's trenchcoat has inspired many occult detective stereotypical look. Most notably the trenchcoat has become a signature staple for Occult Detective in fiction. Hellboy, Harry Dresden, many John Constantine expies such as Willoughby King, Gravel, and Cal MacDonald, Castiel from Supernatural has adopted the look.

Retrieved from "https://hellblazer.fandom.com/wiki/John%27s_trench_coat?oldid=10983"
Community content is available under CC-BY-SA unless otherwise noted.