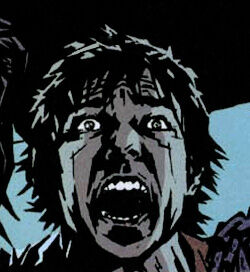 Jason Spatchcock was a mental patient, painter and brother of Angie Spatchcock. His first appearance was in Hellblazer issue 182.

Jason is an unremarkable-looking man of average build in his 20s. His schizophrenia makes his personality volatile and unpredictable - much to the consternation of his sister, who has spent much of her life looking out for him.

Jason Spatchcock had a fairly normal childhood in working-class Liverpool until the age of 14. Seemingly overnight he became withdrawn from his family - even his sister Angie, with whom he'd been close - and began a descent into paranoid schizophrenia. Unfortunately the doctors misdiagnosed him and his illness went untreated. Eventually he was caught stealing copper from a disused railway line and sentenced to 18 months in prison. There he was tormented even more, and prison psychiatrists were reluctant to diagnose schizophrenia as this would give him grounds for an appeal. By the time he had done his 18 months he was a wreck, and was committed to an asylum in Bedfordshire. (Hellblazer issue 186, 2003)

In 2003 a doorway between this world and the next opened up beneath the asylum, allowing the spirits of the dead to inhabit the living. Jason was one of the possessed, and therefore became a target for deadly soulherds who were freeing and claiming the trapped souls by killing the hosts. Angie and John Constantine managed to close the door, sending the ghosts and soulherds back to where they came from. (Hellblazer issue 182-183, 2003)

Not too long after that, Jason made a complete recovery and was released from the asylum and into the care of Angie. However, he had been having visions of The Shadow Dog, a creature whose presence heralds a time of madness and murder. Jason and Angie joined John and an occult task force whose plan was to summon The Shadow Dog and kill it. Jason was used to channel the Dog, but upon killing it the team discovered that it was actually there to protect humanity from a creature called The Beast. Worse, The Beast was actually inside Jason all along and he had been dead for weeks. (Hellblazer issue 189-190, 2004)