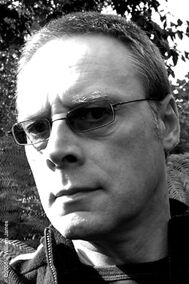 Jamie Delano (born 1954 in Northampton) is a British comics writer. He was part of the first post-Alan Moore "British Invasion" of comic book creators. He is best known as the first writer of the comic book series Hellblazer.

Jamie Delano was hand-picked by Alan Moore, creator of John Constantine, to write the character's further adventures outside of Swamp Thing. Delano established the character in his own right, fleshing out what had been, in Moore's hands, a more shadowy, wisecracking figure. It was also Delano who set the character firmly in London, Moore having preferred to present him travelling virtually anywhere at will. Delano's Constantine is very much flesh and blood, never using magic when a con will do, frequently drunk, down and out, and haunted by his accidental condemning of a little girl named Astra to Hell.

Delano's approach owes much to the quiet, cold but vicious work of British 'new wave' writers like Ramsey Campbell and J.G. Ballard. He established Constantine's history and lineage, going all the way back to the time of King Arthur in Hellblazer Annual 1. Much of his version of Constantine was the basis of the 2005 Constantine movie.

He created John's "sidekick" Chas as a homage to his own life experience - Delano was a London cab driver for nearly seven years, before he started writing comics for British publishers, on Alan Moore's recommendation.

Much of Delano's other work can be characterized as science fiction or horror, but often is a blend thereof and used very allegorically. In its concern with transformation of bodies and cultures, through psychedelia, conspiracy, or science, his work shares much with the likes of David Cronenberg. Frequent subjects in his work include the war of the sexes (World Without End), imperialism and genocide (Ghostdancing), and environmental and cultural collapse (2020 Visions, Animal Man).