Jack of the Green

View source
Jack of the Green 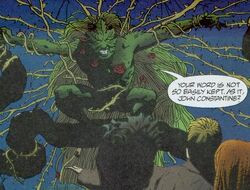 Jack of the Green is a powerful elemental and personification of Britain's green and pleasant land. He is the traditional mascot of the English May Day parade.

Jack is one of the pivotal supporting characters during Paul Jenkins run on the series. He helps John Constantine in his fight against two of the most prominent enemies in the run, the demon Buer and the immortal Myrddin. He is also a close friend of many of Britain's folkheroes such as King Arthur and Bran the Blessed.