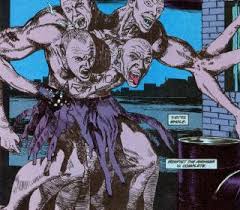 Ironfist the Avenger was a monstrous construct created by Nergal from the four dead bodies of Kenny, Wayne, Col and Keef - members of the neo-nazi gang called British Boys. Nergal came across these kids when they tried to assault Nergal after thinking that he was a "filth", which is a derogatory term used for non-white people in 1980s Britain.

Ironfist was then sent to capture Zed, and John tried to fight him off using brute strength but to no avail. However, John noticed that the boys were actually football hooligans, each wearing different tattoos of football clubs. John then uses this knowledge to make them fight and destroy each other

Retrieved from "https://hellblazer.fandom.com/wiki/Ironfist_The_Avenger?oldid=10864"
Community content is available under CC-BY-SA unless otherwise noted.