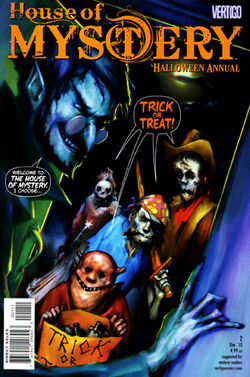 The story takes place during the events of Hellblazer issue 272; John Constantine has just leapt from a window to contact Shade the Changing Man, who has kidnapped Epiphany Greaves. But the link fails, and as John picks himself up, he finds himself purused by Gloria, a succubus. He guesses that her sudden appearance isn't a coincidence. In fact, he says, he doesn't believe in the concept. And that reminds him of something in his past...

John recalls the days of his childhood, before Halloween became a big part of British culture. Back then the big pre-Christmas winter festival was bonfire night, when effigies of Guy Fawkes, the man who tried to destroy parliament, were burned. It was on bonfire night 1966 that John began to get close to Katie Morgan, a lovely posh girl whose dad had died in a fire, leaving her and her mother so poor that they had to move to John's part of Liverpool.

Katy, recalling her dad's death, asks John to take her away from the bonfire. He walks her home to her mother's house, where he's welcomed in with hot chocolate. Over the next few weeks the two get closer and closer, until John's headmaster, Mr Watson, intervenes and tells John that not only is he not good enough for Katy, if they're seen together again John will be sent off to borstal. Terrified of being locked up, John blanks Katy until she stops talking to him. That night he curses Mr Watson, imagining the teacher burning to death. That same night something happens to Mr Watson's house and it burns down with him in it.

Back in the present day John says that nobody knew what caused the fire - a faulty wire, arson or something else - but that it was an odd coincidence. Except, of course, that John doesn't believe in coincidence...