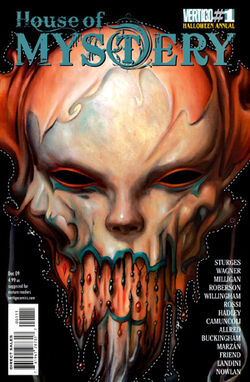 Plot summary of the Hellblazer story

Constantine is trying to get through Halloween with a quiet pint when he finds himself badgered by an acquaintance named Phil, who's been dumped by his girlfriend and wants Constantine to make her fall in love with him again. But having got Phoebe killed by dabbling with that kind of magic, Constantine is obviously reluctant. Frustrated, Phil threatens to tell a journalist friend of his about John's dubious activities and John barks at him to do everyone a favour and kill himself. John doesn't mean it, but it does the trick: Phil leaves quickly.

At his house, Phil writes a letter thanking John for putting him on the right path. He explains that he didn't want to mess it up and come around in hospital, nor did he want to feel any pain, so he went on the internet and found someone who could help him. That someone is a tall, pale man who turns up at Phil's door with a mysterious mask and asks Phil to put it on while he goes to work. Phil is perturbed, saying that he expected a large dose of narcotics, but the man places an ugly old mask over his face and says that such drugs would render Phil's skin useless for his purposes.

The man says that the mask will leave Phil paralysed but able to feel and hear everything, adding to the potency of his skin and organs. The mask also lets him see the man's true form as his introduces himself: Julian, a Babylonian demon.

John's feeling guilty about what he said and wants to make sure no harm comes to Phil, but he turns up too late: Phil's half-skinned and dead already. Julian, spooked, bolts, but Constantine manages to bind him briefly. Julian is furious about how Constantine's love potion has destroyed his life and manages to escape. John takes the mask off Phil and looks through it, seeing the truth of how complacent he has become about his life. He thinks about how he should destroy the thing, but he's too sick of it to hold on to it for much longer. He throws it in the trash and walks on.