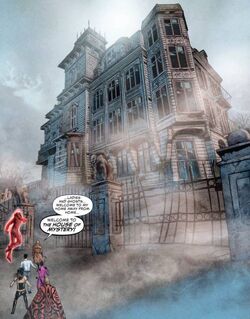 John Constantine has had one "advertisement" appearance for the House of Mystery, in which he talks about his former visits to the House of Mystery. A short story of his life was also presented in both the first and second Halloween Annual. This stories takes place within the current Peter Milligan Hellblazer run.

The House of Mystery operates as the Justice League Dark's base of operations. John Constantine claims he won the keys to the place in a poker game between Father Time, Doctor Occult and himself. John also uses the house as transportation and as a weapon.

By Justice League Dark issue 30, John lost the House to Zatanna when he was ousted as the team leader, but, in the series finale, the House itself to called to him, demanding that Constantine come back home.

The House is a sentient living being. It is virtually indestructible, and can fix any damages done to it. The House is virtually a realm that houses infinite amount of monsters and organisms, which John uses as his personal demonic army. The House can travel through different realms and in between time and space, where John can use it as a means to travel and escape. The House exist in a "Void of Time." Time does not pass in the House itself, as though it would seem as John has spent years in the house without appearing to age.

Any uninvited visitors that unwittingly goes inside the house is stricken with psychological attacks. They are cursed, and are forced to relive their worst nightmares. Worst of all, they become slaves of the owner of the House, John Constantine to be specific, and becomes under their control. John can summon them back at the house whenever he needs them.