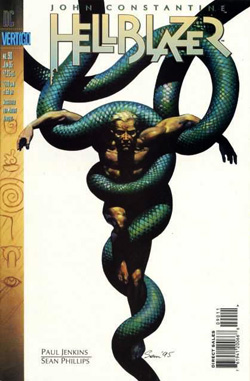 John Constantine: Hellblazer #90 (June 1995) With the Rainbow Serpent poised to wipe white men off the planet, John comes up with an audacious con that works in both their favours...

Submerged in Dreamtime, John Constantine is now face to face with the Rainbow Serpent, which demands that he sing for forgiveness of his trespass onto her territory. Back in the real world, John has stopped blowing on his didjeridoo, much to the confusion of Jeffo and the rest of the aborigines. He’s figured out how to handle the Serpent, refusing to sing anything to her. The snake wraps him in her coils, but as he explains, her power can’t touch him because he’s a whiteman. The aborigines have stopped their dance, and because they are the real power of the Dreamtime that means the Serpent’s magic is fading. After a moment of thought, the Serpent asks him to make the aborigines dance again, and in the real world John again starts to blow on his didjeridoo and the ceremony continues. Constantine has figured out that the Serpent’s threats and messages mean nothing to the average whiteman, but that he’ll help her out for a price. The Serpent offers him the answer to any question he may ask, but he refuses and says, “Let’s just say you owe me one.”

Meanwhile, Kate Grimshaw thinks back to her childhood, to when her father committed suicide because he was forced to give his land to the aborigines. Now an old woman, she tells her men that the “abos” will move off their land no matter what. Back at the river, John has returned from the Dreamtime, and he asks Jeffo if he’s able to send a letter out from their location, saying he’s out to perform “just a little whiteman’s magic.”

A week or so passes, and Jeffo asks why they’ve been sitting around doing nothing when the whitemen are due to return soon. John tells him to have faith in the power of the whiteman’s symbols. On the surface, the letter he sent to Australia’s Director of Aboriginal Affairs said bugger all, but the threats hidden beneath the words will work just enough magic to get the job done. True enough, after reading the letter, the Director rejects the order forcing the aborigines to move.

Unaware of this new development, Grimshaw and her men return to the river to make the aborigines leave. John smarts off and receives a rifle butt to the face for his trouble. Grimshaw holds him at gunpoint and gives the aborigines two minutes to leave before her men start shooting. Instead of leaving, however, the tribe begins to dance, and to the surprise of the whitemen the Dreamtime begins to merge with the real world. The Rainbow Serpent emerges from the water and makes short work of the men, killing them all. Before it kills Grimshaw, the snake tells her that “whitey shouldn’t have disturbed my dream.” After the work is done, John tells the Serpent that it really owes him now. The snake says it will let him know and then returns to the river.

The next day, after a brief goodbye to Jeffo, John is on a plane back to London. He realizes that this small victory was just the beginning of the Serpent’s battle against the whiteman, because like Jeffo told him: “Everything comes from a seed.” The plane then passes over an open field, one that has the shape of a large, spiraled snake cut into the grass.

Retrieved from "https://hellblazer.fandom.com/wiki/Hellblazer_issue_90?oldid=11122"
Community content is available under CC-BY-SA unless otherwise noted.