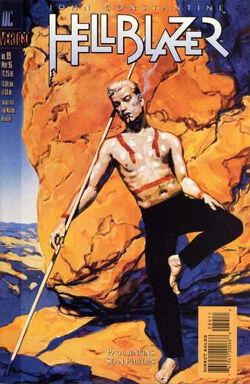 John Constantine: Hellblazer #89 (May 1995) Still Outback, Constantine intervenes with some white landowners who want to kick Jeffo and his mob off their land. When words don't work, Constantine decides to get in touch with Aboriginal god The Rainbow Serpent...

Sitting beside a waterfall in the wilds of Australia, John Constantine is prepared by a group of aborigines for his first trip into Tjukurrtjana, the “invisible dreamtime” that connects all points of time and space to each other in the constantly moving universe. As the aborigines paint sigils on John’s body, his friend Jeffo asks him if he’s ready for the journey. He hands Constantine his dijereedoo and tells him to play, and that if he plays it good enough then the snake will hear him. “Listen to the sound of the waterfall,” he says, “That where snake is, mate. You play the sound so the waterfall come into you.” Despite the two-packs-a-day making his chest burn, Constantine plays, and his world slowly begins to melt into something new. He remembers what Jeffo said days earlier; “The tree, he the dream of the seed. The mountain, he just an echo of the force that created him.” At first, John didn’t understand what he meant, but as he enters dreamtime he begins to get it…everything comes from a seed. Fully immersed in dreamtime, John meets a talking kangaroo that, after learning that he’s looking for the Rainbow Serpent, decides that this white man is crazy. The kangaroo tells John to jump into the river and the Yawk-Yawk will take him to the snake, but to be careful, because “…you piss her off, she bite hard.” Constantine jumps into the river, at the same time trying to remember that this is all taking place on another plane of reality, and that he isn’t really there. He dives deep into the water, where he finally comes face to face with the monster that is the Yawk-Yawk.

Two days before, John returns to Australia on Delvene’s boat, but when they dock they see Jeffo waiting for them with warnings of trouble. Despite her hopes for the two of them getting together, John follows the aborigine and leaves Delvene standing in the rain. After a day of walking through the Outback, they stop to rest. Jeffo tells John that he’s different from other whitemen, that he can see Tjukurrtjana, the Dreamtime. Suddenly, Constantine begins to see a pattern of brilliant colors, his first glimpse of Dreamtime. The next day, Jeffo leads his companion upstream, where they find a rotting kangaroo carcass that is dead from disease. Jeffo explains that the whiteman has been polluting the river in hopes of driving his people away. Constantine doesn’t understand how he can save the aborigine, but Jeffo says that it’s the whiteman that needs saving. The Rainbow Serpent has become angry and has started telling all of the animals to return to the Dreamtime.

The two reach a massive waterfall at river’s end, where the Serpent lives. Jeffo says that the whitemen want this land, where his tribe also live, because they want to make a uranium mine. The rest of the tribe arrive, followed by a carload of whitemen with guns. An older woman named Grimshaw tells Jeffo that his tribe are officially trespassing on sold property and that they are to leave immediately. Jeffo tears up the woman’s papers, saying “Land doesn’t belong to us, we belong to the land.” Grimshaw orders her men to fire over their heads, but John steps in and warns that the men “get hungry when they’re pissed off”, alluding to cannibalism. Seriously irritated, Grimshaw and her men leave, saying they’ll be back in two weeks.

In the present, John continues to blow on the didjeridoo, experiencing the full effect of the Dreamtime. In the dream, the Yawk-Yawk grabs him by the leg with its teeth and carries him to a large cave beneath the waterfall. As he coughs up water from his lungs, he realizes that he’s come as an emissary of the whiteman, there to plead his case. He looks up and sees the massive Rainbow Serpent, whose angry hiss forms the words “Sing to me, John Constantine.”

Retrieved from "https://hellblazer.fandom.com/wiki/Hellblazer_issue_89?oldid=9561"
Community content is available under CC-BY-SA unless otherwise noted.