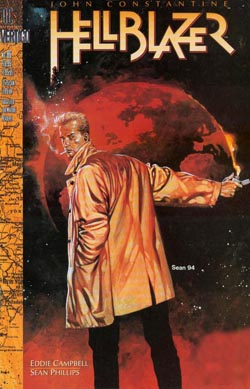 John Constantine: Hellblazer #86 (February 1995) Philadelphia: Sir Francis reanimates the relics of John the Baptist and makes cockroaches burst out of a man's boils as part of a plot to make the world think that the Apocalypse has come to pass, rather than the horrible truth that reality is coming apart at the seams. Constantine meets up with The Church of Virtual Reality, a bunch of Discordian freaks who think that the universe is suffering from psychic ebola.

Tennessee. An evangelist attempts to “heal” a poor man stricken by a giant sore on his cheek, but as he does he’s shocked and horrified to find the sore bursting open, revealing large roaches. Italy. The severed head of John the Baptist is stolen along with other relics and places atop a man shoulder where they both appear to exit the church now sharing the same body. Philadelphia. John and Sir Francis Dashwood discuss these very events. A reluctant John doesn’t see the big deal but Dashwood implies that they are smokescreens for reality’s crumbling. Dashwood is trying to fool the human race into thinking that it is just the apocalypse coming to pass. As John asks for more information, Dashwood welcomes the fifth member of the Hellfire Club (of which John is now included), the spirit of Benjamin Franklin. As John and Franklin get acquainted, John muses that he is the most regularly spotted ghost in the past two hundred years. Benjamin recalls that he was once credited by explaining that spirits in heaven could communicate with living beings through use of magical forces. He then explains that he has not the vanity, folly, or ambition for heaven then longs over his taste for fine food were he flesh like John. Franklin says that the spirit life is no more different than the church life. Where he and Dashwood, after completing a prayer book together, were discouraged to find how many lies and rumors were spread about it afterwards. These rumors and lies gave way to many cults and followers that smeared the name of the Hellfire Club. The prophets of today are false, Benjamin goes on to explain. He says that vanity and egotism has gotten in the way of what truly matters. This is what has given rise to the chaos gaining a foothold in the world. John doesn’t know what to believe, and for all he knows he could be in a padded cell right now. Benjamin informs Constantine that if this goes on too long everything that they know will be useless when reality crumbles, so they need John to help perform a spell. Dashwood tells John that he must circumnavigate the globe for them and asks whether or not he brought a talisman with him. John, having left London in a hurry, replies that he only brought his cigarette lighter. With that in mind remembers that he forgot to pick up cigarettes and decides to leave for a short while to get some leaving Dashwood and Franklin alone.

Inside the two talk briefly about their life as spirits as Franklin recalls that he wanted to see the United States of America far longer after his death. He wanted to be encased in wine at his funeral for a few friends. At that Dashwood suggests that they “get back in the barrel”.

Outside John muses on how easy it was to leave the two of them as he smokes a menthol cigarette, claiming to buy them every time he travels. Tossing the cigarette, he prepares to ask the vender something before he is unexpectedly ushered into a stopped car. The vehicle drives away in a hurry. Inside the passenger offers Constantine one of his cigarettes. John takes one gladly and asks what this was all about. The passenger relies that he’s a member of disorganized religion. John jokes that he thought he was being abducted by the Jehovah Witness protection program. Laughing, the passenger informs his driver, a man looking very similar to Dream, to get them back to headquarters. He then tells John the name of their church – The Church of Virtual Reality where you make your own world.

As they arrive the passenger tells John his name, Mordecai the Beaneater and then introduces a woman names Eris (named after the goddess of confusion). John asks where they’re going and after a small ramble from Eris, she tells him the bar. As they take a seat inside, a woman joins them who claims to know what’s going on and why Constantine is here. The two exchange stories, John telling her that he was told reality is being kicked in the bollocks, and the woman explaining to John that it’s a virus and it’s the biggest one to it since AIDS. Confused, John asks whether this is a medical or electronic epidemic and she replied both. It’s the everything virus.

As she explains the nature of viruses, Mordecai follows on into great detail of the symptoms that everyone will endure once the virus is spread. The first stage is seeing phony systems infiltrating the regular one. John asks if seeing urban legends coming true was an adequate example. Curious, John turns the tables, asking them how they knew where and when to find him. Mordecai explains that it was disturbances in the matrix (ha!) and that there are many of them. John tells them that virus’s are the latest craze. Everyone is talking about virus, like Ebola, and AIDS, and even one in great detail that turns the human body into a mixture of ooze very rapidly. John joins in, recalling incidents that are related to viral infections and accidents. When John goes out on a limb and hypothetically asks if this were all true what would they do about it, he gets an off the wall answer by the group that would require finding some kind of drug in the 98.6% of unexplored Brazilian flora. Astounded by the sheer stupidity of the idea, John rises from the table and prepares to leave. As he leaves, the others follow, explaining to him that this isn’t a joke but they find no seriousness left in Constantine. Eris notices a cat in the distance and a frustrated John confirms it to be Murnarr. When he sees the large cat demon brandishing a weapon, John shouts for them to run, but it is too late. Murnarr pulls a sword from his belt. John tries to move but finds his feet are like cement and that everything turns to slow motion. As Murnarr pulls back he moves in to strike. A confused Mordecai watches in surprise as the blade flies over John and cuts off Mordecai’s head. Murnarr tells John that his job is the bleeding, if John takes care of the binding. The blood from Mordecai’s decapitated head pours from his neck onto John in slow motion.

Retrieved from "https://hellblazer.fandom.com/wiki/Hellblazer_issue_86?oldid=8672"
Community content is available under CC-BY-SA unless otherwise noted.