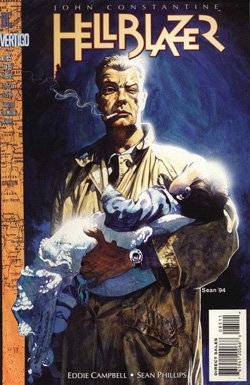 John Constantine: Hellblazer #85 (January 1995) London: Chickens giving birth to human foetuses; a Japanese man evolving backwards; the new Inquisition getting geared up to torture the world: reality is unravelling and John Constantine is the only one who can stitch it back together. Along with the ghost of a famous hedonist and a cat demon, he must travel the world as part of an enormous healing spell.

Uncle Arthur is having problems, and John Constantine is right there to help. Arthur’s awakening from a possessed state to announce various examples of how the world is falling apart. John, watching him, recalls the events which led him to providing his assistance.

Assuming it to be an easy job, he came to return the favor to Arthur’s niece, Sam, who helped John with a séance in the past. John asked her about Arthur’s condition and she informed him that Arthur’s body is there, but someone else is operating it. She continues to say he rambles on about “the others” coming. Curious John agrees to perform some kind of exorcism to help Uncle Arthur. But as soon as John put his hand on Arthur he experienced some apocalyptic vision and passed on. John muses that he has the touch of death. Not being one for explanations, John decides to go out the window rather than be the bearer of bad news. Unfortunately the bars over it give him no other options. John recalls that Arthur wasn’t as daft as he may have appeared because John’s been having the same “urban legend” style dreams himself – an example being the chicken that gave birth to a human but ate the evidence before anyone knew. He wonders why Arthur was the one having these dreams even if he may have been a psychic and an owner of some very wicked occult literature. John decides that they’re either nuts or they’re right, but he hasn’t the time to sort it out as he opens the door to explain the condition of poor Arthur…

…only he can’t because Sam, Arthur’s niece, isn’t there and in her place would be a large cat, a woman with no eyes or arms and a rather Victorian looking spirit. The ghost informs Constantine that he didn’t come from the dark regions of hell but rather from the “nectar of the Gods” which is to assume heaven. He then tells him that his name, when he was mortal, was Sir Francis Dashwood. Confused, John questions Dashwood how he, the founder of the Hellfire Club, is allowed into heaven. Dashwood replies that the beliefs people have of the club are merely fiction, all that is, except the orgies. Dashwood takes a time out to introduce the rest of his partners: Murnarr, the large feline, and Bona Dea. John asks where Arthur’s family is at, only to be refused information as Murnarr goes to check on Arthur. Dashwood begins to feel misunderstood since his death at the number of people who’ve associated his name with the number of satanic acts the Hellfire Club has become infamous for. John laughs it off, giving him no pity because he was in politics. In fact he would have been pegged for Jack the Ripper’s handiwork if he’d had been around one-hundred years ago. Dashwood continues, explaining that his reputation has been soiled due to the reestablishment of the Hellfire Club here in London where unspeakable acts are being preformed under the misunderstood intentions of himself and the other founders. When John inquires what acts those may be Dashwood replies that a man was found dead with a rodent imbedded in his rectum that proceeded to devour his intestines. Amused, John asked where Sir Francis got a hold of that piece of information. Dashwood replied he was informed by a deceased friend, but John passes it off as nothing but another urban legend. Dashwood becomes confused, unaware of urban legends and as John provides him with a few examples, Murnarr emerges from Arthur’s room with a piece of the recently deceased in his mouth, asking Dashwood if he’s gotten to the point yet.

With a dry comment from Constantine, Dashwood pleads with Murnarr that he wasn’t supposed to eat anyone. Bona Dea interrupts by excusing Murnarr’s behavior as instinctive. Sir Francis and the others need Constantine’s help, but as reluctant as he is they appear to be talking to a wall. Bona Dea tells him that reality has been split in two and the guts of it are beginning to fall out, although it’s hidden know she can defiantly see that it’s becoming worse at it goes. They need to perform an enormous spell to try and regain a hold in the balance of reality and as collateral they’re holding Arthur’s family gagged and bound. Without much more to go on, and the fact that there’s nothing on the box anyway, John decides to play along. As John rings a friend to come and help Arthur’s family, he leaves with Dashwood for his place to pack a few things. As the two start outside, Sir Francis continues to try and shape the good name of the Hellfire Club with a comparison to Joseph Addison’s own KitKat club but before John has his full attention he notices something down the street.

Just beyond them a large crowd has gathered and there is a colossal ball of fire that lights the street caused by an explosion to Sam’s car. Dashwood informs Constantine that its doomsday and the spirits of the old London mob can feel it and are starting to move to the mortal plane in search of Dashwood himself. John asks him why and he replies that they never forgave him for introducing a liquor tax while he was in government. John decides to take the tube and asks Dashwood to keep to himself for a bit, not wanting to finish the rest of his days in the mental institution for being caught talking to himself. Later, at John’s place, Dashwood recalls the mobs in his time didn’t need much on an excuse to form. He then tells of a specific man, Ned Dennis who witnesses a riot forming on his way home. Naturally he was swept up in the frenzy and took in with their cause whatever it may have been and was then later jailed after being recognized. When he was sentenced to death with the others, the officials thought it best to revive him in order to complete the task. Dennis hung his fellow ring leaders, realizing that chaos and madness were worse than death. Dashwood agrees with this theory, explaining the current situation and then informs Constantine they are to leave in the morning for Philadelphia, Pennsylvania. That night John begins to think this entire mess over. His feelings of going to the States are negative, but he feels this whole trip will take him more than just one way. It’s his fate to be sucked into these kinds of things.

On the flight up, John is treated to a light joke before landing in Philadelphia with Sir Francis. As the two continue down the airport John relates the joke on the flight to another urban legend, but before he can do so the security fuss up ahead grabs John’s attention. As one of the drug dogs pulls a newborn from its mother’s arms, several cries of distress are heard from around. John and Dashwood move closer to see what’s going on. The baby, already dead, was stuffed with drugs to be smuggled into the States. When Dashwood asks if this too is an urban legend, John simply says it is not – “it’s just horrible.”