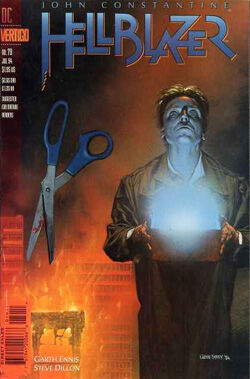 John Constantine: Hellblazer #79 (July 1994) Helen's suffering withdrawls and her pimp's closing in, but Constantine has other things on his mind - like keeping Gabriel's heart safe as a bargaining tool. Racial tensions continue to rise in Tower Hamlets as the police begin their search for George. The First of the Fallen destroys his supposed brothers, but doesn't see Astra form a blade from their remains, nor does he hear her ominous threat...

Remember Helen, the smack-addicted hooker we met last issue? Well, she’s not handling the cold turkey thing well. As evidenced by her coming at John with a pair of scissors and screaming that she wants her fix. She manages to give John a nasty cut on the hand before Jo, another nurse and a friend of Sarah’s sister, knocks her out with a tranquilizer. Jo proceeds to inform our boy that he’s a prick and again lets him know that not taking Helen to a hospital is a bad idea. “Just who the hell does he think he is?” Jo inquires, watching John as he leaves. “God save us all from people like that.” Meaning, know-it-all bastards who think they’re doing the right thing.

Outside the building, Chas remarks that he’d never resort to doing heroin, which John balks at. “Bollocks. Anyone’ll do anything,” he tells Chas, when he met Helen initially she didn’t drink or do drugs and he just knew she’d never need to. “And now look at the bleedin’ state of her. No one has a line and no one has a soddin’ moral code either, not outside a John Wayne movie.”

In the car, John reaches for a box Chas brought for him, asking if the taxi driver actually looked inside it. Chas reminds him that the last time he snooped around the stuff John keeps in his lock-up he had to sit through one of John’s old Membrane videos. John opens the box to reveal Gabriel’s heart, which he had Ellie snatch during the “Fear and Loathing” arc. Once Chas manages to calm himself, he brings up George Ridley and the last issue’s run-in with the cops. John practically shits a kitten that Chas didn’t tell him sooner.

Meanwhile, Helen’s pimp, pissed off at the beating he took last issue is looking for both of them. To aid him in his search, he’s taken a bolt-cutter to the finger of a local snitch and threatens to do worse if the guy doesn’t tell him John’s whereabouts. The guy is understandably reluctant, fearing retribution from Constantine should word get out that he was the rat. He changes that tune when the pimp goes to work on his lip with the bolt-cutter.

After a brief visit to the crime scene in front of George’s house, John makes his way over to his (literal) psychic friend, Nigel. The two pals catch up for a bit before Nigel guiltily confesses that he recently did a review for an underground rock magazine. For money. “I sold out,” Nigel weeps, “I’m just a dirty whore.” John eases his guilty conscience and assures him of his integrity, “We all sell our souls sooner or later.” To cheer him up, John whips out the heart and asks the stunned psychic to locate it’s owner.

Elsewhere in London , George Ridley is in hiding. A group of friends have assembled to let him know that the cop he shot is, indeed, dead. The remark on the inevitability of the cops coming to look for him and how they’re not going to let that happen. They’re planning a riot and they’ve got Deacon, a local Rastafarian crack dealer to help back them up. When George complains that he doesn’t want a race riot incited on his behalf, his buddies inform him that he has very little say in the matter. “All your choices have been made for you. Your side’s been picked for you. Only one thing you can do now... and that’s live with it.” On that note, we come upon our old pal Gabriel. The last year on the streets hasn’t been to kind to him. John mocks his suffering derisively and informs him that he’s plotting a trap for Gabe’s old “Adversary” – read, the First of the Fallen. “I’ll set him up for you, then you kick seven shades of shit out of him. He was never in your league, so I reckon you’ll breeze it.” John teases him about possibly returning the heart before pulling his disappearing act, informing the fallen angel that he’ll keep in touch.

When we return to Helen, we see that her pimp has caught up to her. He stands over her, leering with smug satisfaction.

And, finally, in Limbo – the members of the unholy Triumvirate have assembled, with Astra accompanying the First of the Fallen. The First launches upon his pitch, saying that after all these centuries he finally knows what Christmas feels like. He explains that the deadlock John trapped them in over the rights to his soul (see “Dangerous Habits”) was nothing more than a bluff. The Triumvirate isn’t exactly balanced the way they believed it to be.

The Triumvirate is balanced in terms of power, but not in terms of individual strengths and weaknesses. The First is called the Devil, even though he’s not one – he fell before there were angels to become devils or demons, and therefore is something different altogether. The other two, both powerful lords of Hell, are devils semantically speaking. Therefore, the same binding spell used to hold them, would be ineffective against himself. And the other two are now catching on that they are both sorely, sorely fucked.

Trapped by the binding spell and completely helpless, the two demons are forced to stand by as the First effortlessly destroys them. Afterwards, he remarks to Astra that after he gets Constantine, Hell will provide her reward. Astra watches the gleeful Satan fly off, seemingly lost in her own thoughts.

When he leaves, the child-demoness forges a mystical blade from the remains of the Third of the Fallen and admires it. “After Constantine, Lord Satan,” she muses, “Hell will be my reward.”