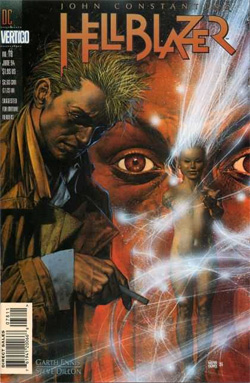 John Constantine: Hellblazer #78 (May 1994) The End is Nigh. The First of the Fallen has recieved a tip-off by Astra, a girl John accidentally damned to Hell decades before, telling him how to break the deadlock between himself and his brothers, thus allowing him to destroy Constantine once and for all. Constantine, meanwhile, makes a raid on the Caligula Club with Header, siezing several arcane pages then finds himself drawn to an old friend who has been drawn into a life of prostitution. George Ridley recieves an unexpected call from racist police officers, resulting in two deaths.

This issue starts off rather amusingly with a blank page and the message, “If anyone wants to pray for him, now’s the time.”

We open on John and Header sitting at a bus stop in the dead of night, somberly staring ahead. Header tells him a story about his time in the Falklands War as John lights a smoke for him. Apparently they encountered some American mercenaries fighting for the Argentinians and were ordered to execute them. During the telling, Header coughs up a little blood but he continues on anyway – he needs to say this. “So then Ah get to the last wan, an’ Ah stick the muzzle between his eyes. An’ he looks up the S.L.R. at me, no screamin’ or beggin’ or nothin’ – just this awful sad, sad wee look, like he knew it was all over an’ he was so disappointed... Tell ye what though, Johnny. Ah think Ah ken exactly how the poor bastard felt, right now.” Tears start to well up in John’s eyes and as we pull back, we see that Header has taken a shotgun blast to the chest. He dies sitting there as John walks off into the night.

John gets back home and calls Rick the Vic. Tells him that they had a bit of trouble getting out of the Caligula Club with the pages they were trying to steal. That Header died trying to shoot it out with the guards. He asks Rick to call Header’s wife and then crawls into bed with his new bunkmate, a black girl named Sarah. Rick puts down the phone, goes to his church and prays, shaken by the loss of his friend.

Meanwhile, the First of the Fallen broods in Limbo, furious about his inability to defeat Constantine when a familiar little one-armed blonde girl shows up. “My name was Astra,” she tells him, and reveals that she hasn’t been idle since being sentenced to Hell by John’s mistake. She’s been siphoning power from the demon Nergal during regular sex with him and she’s been doing it with one special goal in mind. She wants John every bit as bad as the First does and she’s got a plan to get him. “May I outline my scheme?” she inquires as the First breaks into a big, shit-eating grin.

John and Chas, meanwhile, are on their way to Tower Heights – to visit John’s psychic buddy, Nigel. Chas balks at this, complaining that the British National Party, the neo-Nazi organization we last saw in the “Fear & Loathing” arc has gained a foothole there in John’s absence. As they’re driving, John spots Helen, an ex-girlfriend of his working as a hooker on the streets. He bolts out of the car and tries to usher her into Chas’ cab when her pimp shows up. John tries to fight him off and, of course, that doesn’t go well. Chas jumps out and beats the hell out of the guy with a crowbar while John gets the girl to safety.

Elsewhere in London, George Ridley (also last seen in “Fear and Loathing”) is getting hassled by the cops at his mom’s house. They toss his place and find a bit of hashish, which they claim he was intending to distribute. George complains that the charges are bogus, he’s being set-up because he attended an anti-Nazi rally a little while ago. Mrs Ridley tries to intervene and ends up taking a fall down a flight of stairs, breaking her neck. George breaks their grip and grabs the shotgun he has stashed under his bed – he fires once, blowing one of the coppers out the window and points the weapon at the other, threatening to take the officer’s head off if he attempts to follow him out.

While all this has been going on, John has talked Sarah into getting her sister to help treat Helen, the hooker he rescued. Neither Sarah or her sister seem too keen on the arrangement, stating that Helen needs to be in a hospital to get treatment for her heroin addiction as well as a badly infected eye. John nixes the idea, afraid that her pimp will be able to find her easily there – he asks them to make a list of supplies and sends Chas off to nick them from the local hospital.

Later that night, John sits up with Helen, helping her through her withdrawals – naturally, she’s having a rough time of it. John is thinking – about some of the decisions he’s made lately, about how Header died, about how the shitstorm around him is about to kick into high gear and he may be leading Helen to her doom. “I need to stop getting distracted and get on with it – find the Snob, call Nigel, get things moving before that bastard down below gets me first. I need to take better care of me mates. To make sure Helen’s okay. To be straight with Sarah. To wise up.”

Retrieved from "https://hellblazer.fandom.com/wiki/Hellblazer_issue_78?oldid=10073"
Community content is available under CC-BY-SA unless otherwise noted.