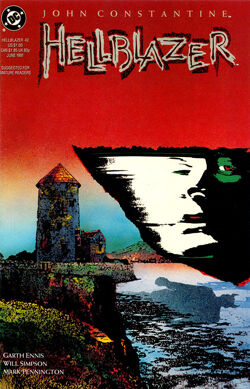 John Constantine: Hellblazer #42 (June 1992) John turns to the one friend powerful enough, smart enough and alive enough to cure his cancer, an Irish drunkard named Brendan Finn. But Brendan has his own problems, and before the night is up John will be in even worse trouble than he was before.

We find John Constantine on a ferryboat, struggling with seasickness. After one of the local truckers plays a nasty trick on him, by putting his plate, piled high with extremely greasy food, John is forced to throw up overboard. After finally reaching Dun Laoghire, Constantine manages to extract some petty vengeance by deflating the tires of a certain truck. We learn that Constantine hasn't been in Ireland for a long time, and he's here to see a certain Brendan Finn, one of the few who could help him with his problem - terminal lung cancer. John takes a cab to Killiney, towards the old lighthouse. On the way, he muses a bit about Brendan, his love for booze, and how he sounded a bit under the weather when he called ahead, though still more than eager to see John again. Having reached the lighthouse, Constantine knocks on the door, immediately greeted by his friend. John notices Brendan's collection of fine liquor, and the pair start drinking and catching up on current events. John leaves the story about his cancer for later, waiting for an appropriate opening. Brendan isn't looking al that good himself, but John dismisses it as a consequence of his endless drinking. They have a brief and painful discussion on their former lovers, John's Emma and Brendan's Kit . It seems that fates haven't been kind to either of them, since the last time they've met. Emma died, along with Ritchie and Gary, while Kit left Brendan due to his excessive drinking. John remembers Kit, the only one of his friend's lovers that didn't hate him, thinking he'll kill her man, and he reminisces about the good old days he spent with her and Brendan at this very lighthouse, the only place where he could get away from the endless horrors and dangers of a magicians life. John nostalgically takes Kit's picture from a shelf, while Brendan is trying to convince him how he threw everything related to her out of the house. Brendan stops the sappy nostalgic conversation, and leads John to the cellar, where he has the finest collection of wines from all over the world, or, as he calls it "bottled sunshine". John's take on it is a bit more cynical - "Bottled liver failure, more like..." Brendan ignores his teasing, and goes on to explain that his drink to him is what magic, tricks and scams are to Constantine. John cements this claim by noticing how booze is like a religion to Brendan. After remembering the good old days, and a certain haunted amplifier at a Sex Pistols gig, Brendan leads John deeper below, through a makeshift underground tunnel. Brendan is still elaborating his life philosophy to John, claiming how he even stopped with the magic, and turned to drinking. The tunnel leads to a cave Brendan found shortly after he moved in the lighthouse tower. He says that the tunnel is his handiwork, since he couldn't trust anyone with his discovery. They enter the cavern, and Brendan shows John his discovery - a pool of holy water that St. Patrick blessed on the course his travels through Ireland. John notices a small table with candles and a pentagram, and questions Brendan's actions, but Brendan tells him to relax, giving him a simple task of opening a wine bottle. While opening the said bottle, John overhears Brendan's chanting, and recognizes it as a rather simple changing spell, which will last as long as the candles are lighted. Turning to Brendan, he notices that the holy water has foamed up. Brendan reaches inside an old chest, taking out two empty pints, filling tem with holy water, which has now changed into dark ale. They start drinking the perfect ale, best that they've ever had. Still, John tells Brendan how magic is not meant for such things, to which Brendan replies "So what is magic for, would you tell me? Come on, like. I can just see the devil comin' to get me for making magic stout."

The two magicians get into some heavy drinking, and after a while, booze loosens John's tongue, and he tells Brendan about his predicament, asking him for his help in battling the cancer with magic. To that, Brendan replies with a good long hearty laugh. John doesn't find it so funny, and lashes out on his friend. But Brendan explains that he's in a similar situation, having fouled up his liver with the incessant drinking, and how he was going to ask John for the same favor. He ads that this will probably be the night when he dies. Those revelations send the pair off into more heavy drinking and singing. Then, Brendan asks John to join him for a final pint of perfect stout, before he dies. They drink up, and Brendan tells John to see himself out. He lies down, the two friends shake hands for one last time, Brendan tells him they'll see each other soon, and a depressed Constantine climbs up the cellar stairs. As John is walking towards the exit, hoping that Brendan's happy, wherever he went, he is overcome by a strange feeling, and the most foul a smell. He wants to run away, but too late. A tall dark man is standing at the doorway. Constantine desperately tries to sober up, while the dark stranger informs him he's here looking for Mister Finn, heading straight below the wine cellar. John warns him that Brendan is in no state to talk, but the stranger replies he is here for his soul, not his wit.

John follows the Devil down to the cellar, wanting to see this deal through, to make sure everything is by the book. The Devil complies, telling him he knows who he is, and how he's already met his father, who is condemned to hell due to his hatred for his son. That becomes the final straw, and Constantine is now determined to foil his plans. he already let the devil take his friends and his father, but Brendan deserves to get away, and with Constantine's help, he will. With a smug grin behind the devil's back, John swears that Devil will rue the day he pissed about with John Constantine.

When they reach the dead body of Brendan Finn, the Devil elaborates on their deal - Brendan sold his soul in exchange for the expertise and power to amass a collection of the finest drink ever tasted. The devil delivered his part of the bargain, and has now come for the soul. Still, it seems that Brendan had one small clause - he insisted that the Devil must take his soul by midnight on the day he died. If the Devil didn't take his soul by midnight, the arrangement would be null and void, and his soul would be free to go to heaven. Devil goes on to mock Brendan's illusions of grandeur, and his silly hopes of outsmarting the Devil with such a deal. He widens his disdain onto every mortal man, calling them stupid, proud, conceited and pathetic. Constantine, in the meantime, checks his watch and informs him that it's five to midnight. Just as the devil is getting ready to take Brendan's soul, John offers him a drink, a chance for the Devil to humiliate Brendan even further, telling him that he is not the self-proclaimed king of the drinkers, that John Constantine put his whole life of drinking in the shadow by having a drink with the devil, over his dead body, even. He takes the glasses and sticks them in the holy ale. The Devil takes the pint of dark from Constantine, complimenting him on his slyness, telling him that he deserves nothing less than a drink with the devil. They drink to the devil's health, and the Devil, surprised with the quality of the ale, starts asking what as Brendan up to, how did he come up with such magic ale. Constantine, wiping his mouth, replies that the candles keep the ale from turning back to holy water. Devil is at first surprised, than angered, and John gives him another wicked grin, before kicking over the ritual table, knocking the candles to the floor. The Devil starts choking, cursing Constantine, who has now remembered the wine that he and Brendan didn't drink, and breaks the bottle in half, giving the decomposing Devil a nice facial jab with it, pushing him into the pool of holy water, where he disappears.

A bit later - John's back in his trademark trenchcoat, thinking about the Devil's escape to Hell, musing how he (the Devil) himself was stupid, proud, conceited and pathetic - all those things he accused mankind of being. Checking his watch again, he sees that it's a minute past twelve, he managed to save Brendan's soul from the pits of Hell. Somewhere in the distance, Constantine imagines a clink of glasses. He climbs up the cellar stairs again, admiring his handiwork. For a moment, he forgot about his illness, the booze had brought back the old Constantine. Still, now he is in serious trouble, because if he dies, the Devil will make him pay for his insolence and arrogance. before this, he didn't want to die. Now he doesn't dare. Leaving the old lighthouse with a bottle of whisky, Constantine muses about the drastic, desperate measures he will have to take, to ensure he stays alive.

Retrieved from "https://hellblazer.fandom.com/wiki/Hellblazer_issue_42?oldid=7886"
Community content is available under CC-BY-SA unless otherwise noted.