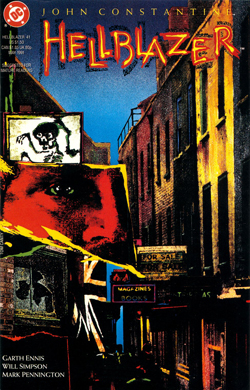 Springtime in London. Everything is waking from its winter sleep. John Constantine is dying. We find him in Frank's Café in London, musing over his imminent death. He lights up a cigarette, and takes a trip down memory lane, to the moment he first found out he was dying.

We flash back to Constantine's apartment, one week ago. John wakes up in a decrepit room, filled with empty beer cans and cigarette packs, not feeling well. He notices blood coming out of his mouth, and rushes to the toilet sink, just in time to throw up more blood. Surprised by the quantity of blood - "too much for bit lip, cut gum or a sore throat" - he starts choking, and barfs some more. This time, its solid, and John is horrified when he realizes he just spat out a piece of his lungs into the sink.

Today, in Frank's Café, John sits, with his head in his hands, remembering how he was eager to think of the culprit, to find out which one of his enemies could be the cause of his illness. Demon Nergal ? The Golden Boy , his twin? Although he doesn't quite recall his time spent in the womb cave, Constantine believed his dead twin merged with him, turning them into something better. He had been taking it easy ever since, staying out of trouble, but now the possibility of Golden Boy's revenge makes him think whether his real purpose in life, for which his perfect twin had prepared them, was to die? No. The answer lays right in front of him. A huge close-up of his hands on an open pack of Silk Cut .

Flashback to a doctor's office, several days ago. Constantine had come to get the results of his tests. The doctor greets him, albeit visibly worried. John can sense right away than all is not right. There's big bad news on the horizon. The doctor finally spits out that Constantine has terminal lung cancer, at a very advanced stage. John tunes out the doctor, when he starts telling him all about cells, cancer spreading, showing him charts and graphs. He asks him how many cigarettes he smokes per day. When Constantine says twenty or thirty, doctor's response is "Ah, well there you are." Constantine hurries out of the office, saying he'll consider doc's offer to make arrangements to pass the few remaining months a little easier. Leaving the waiting room, John hears the doctor telling his secretary to cancel all of his remaining appointments for the afternoon. John thinks this is just a gesture to make him feel a bit better/special. Outside, on the street, he dumps his Silk Cuts in the nearest trashcan, blaming them for his pending demise. Still, he buys another pack at the first newsagents, around the corner.

Sitting in Frank's Café, John observes a group of youngsters buying sandwiches from the proprietor, and muses about death, how he's never going to see his friends again, seeing how they are all butchered, lost or scattered, gone a long time ago. "Still..." he thinks "...that's never stopped them before."

Flashback to the night before. Constantine's nightmare. John dreams he died, got prepared by the mortician, and was buried. Then, out of the blackness, there's a light, and someone calls his name. A hand reaches out to him. It is something John had been expecting, but was hoping it wouldn't happen. He is joined by Astra, the little girl he failed to save from the jaws of Hell in Newcastle. He tells her that he killed her, to which she replies that he, too, is now dead. Constantine tries to avoid what's coming next, but Astra leads him forward, and they are suddenly joined by the ghosts of John's dead friends (as seen in #7 an #9). John's not too pleased to see them, assuming they'd leave him alone now. The ghosts accuse him of being responsible for their deaths, to which he replies that he had avenged their deaths, wiped out the bastards that killed them. The ghosts aren't satisfied with that, and John gives them a piece of his mind, telling them to leave him alone, to stop haunting him. He is not pleasantly surprised to hear that it's not them haunting him anymore, for - how can you haunt someone who is already dead? He is the one who came to them, their memories, and as penalty for his crimes, they are to extract their vengeance on him, for ever and eternity. Just as the ghosts are getting rough on John, he wakes up, terrified, and desparately rummages on the littered floor, looking for a cigarette. As soon as he lights one, the vomiting kicks back in. Constantine spends the rest of the night with his head over the toilet, throwing up a mixture of puke, blood, lungs, and thanking god he didn't have to go back to sleep.

Back at the café, while the cafe proprietor consults his watch, looking disapprovingly at John, Constantine's thoughts dwell on his nightmare and the realisation that he is hanging onto the memories of his friends. John concludes that he can handle the dreams and that the true nightmare began earlier that day...

Flashback to a London hospital, earlier that day. John is paying a visit to to Mark, a doctor friend of his, to ask a favour. He lies about his dear old Aunt Dolly having cancer, and that he's looking for a nice place to set her up. Mark takes him on a tour of the cancer ward, but is suddenly called to deal with an emergency case. He rushes off, leaving John to see himself out. John decides he doesn't want to spend his remaining days pumped full of drugs, lying in a filthy cot, surrounded with smelly old geezers. As he starts to leave, he is addressed by one of the terminal patients, Matt, an older chap who asks John for a cigarette. They immediately hit it off, and John confides his condition to Matt, and in return Matt tells him his own story. Constantine leaves, promising to visit Matt (but significantly leaving out the word 'soon'). Outside, he starts thinking about possible ways to elude death.

Back at the café, the proprietor is still suspiciously gazing at John.

Flashback to Constantine's apartment, a couple of hours ago. John gets a phone call from his doctor, who has found something strange about John's blood test results. That raises John's hopes that he's not going to die. Unfortunately, the doctor simply wants him to come in for more tests. John, realizing that the doc had stumbled upon his demon blood, angrily hangs up the phone. Mad with rage, he leaves the apartment, cursing the doctor, who was probably already considering reckless commercial and military applications of John's blood. John walks aimlessly for hours, before ending up at...

Frank's Café. He is thinking about the people who owe him favors, when he's confronted by the owner of the Café. Constantine has been sitting there for more than two hours, with a single cup of tea, which he didn't even drink. John replies that it has gone cold, and that he can't be expected to drink cold tea. When told that the tea's bound to go cold, when left for two hours, John, with an innocent grin, asks "No chance of a refill, then?"

Thrown out of the cafe, John walks the streets of London, trying, but failing, to find some small consolation in the fact that he's still capable of baiting morons. Although he is determined to challenge his fate, he knows that this time he's screwed and will die.

Retrieved from "https://hellblazer.fandom.com/wiki/Hellblazer_issue_41?oldid=7885"
Community content is available under CC-BY-SA unless otherwise noted.