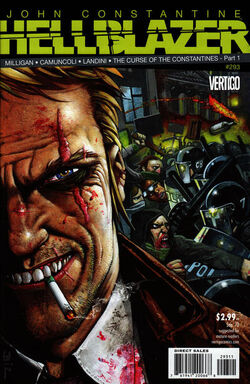 John Constantine had no intention of tracking down his long-lost nephew, Finn , despite the promise John made to Finn's dead mum and John's sister, Cheryl . But jealous outbursts, strange visions and a ritual murder may force him into it after all. Dark magic, tainted blood and the occasional dead sheep – it’s all in part one of “The Curse of the Constantines .”

Retrieved from "https://hellblazer.fandom.com/wiki/Hellblazer_issue_293?oldid=9337"
Community content is available under CC-BY-SA unless otherwise noted.