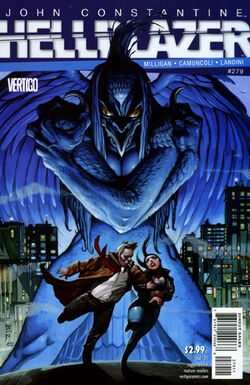 John Constantine: Hellblazer #279 (July 2011) continues the 'Phantom Pains' storyline. As his possessed thumb drives him on, Constantine closes in on Leo, Darren and his original digit - and makes a terrible deal in the process. Meanwhile, Gemma and Tamsin continue their plot to destroy his life.

Our newly married urban mage doesn't know it, but his niece, Gemma, blames him for a brutal assault. Now she's planning a suitably demonic revenge – and she's dangerously out of her depth. Meanwhile, Constantine's got himself a new thumb – but any pleasure this might bring him is cut short when his young wife reveals a terrible secret. Well, what did he expect? That married life would be one long honeymoon?

The issue begins in a dream, as Epiphany slowly realises the connection between Lady Lazarus, her fear of John's thumb-stump and the cancerous vision she had. Before she can fully piece together the clues, however, she's woken by a phone call from John. He tells her that he might be a while; she mentions that Gemma has been acting weirdly but John is too busy thinking about what he has to deal with next: one Terry Greaves. Chas drives John to Greaves's place, where he intends to confront him about Tom Gott's death. As they move through London, a mysterious, demonic creature floats through the night sky...

In her back yard, Gemma prepares to burn John's trenchcoat - having already acquired the hair and skin she needs to summon the demon - when she decides to sell it on the internet instead, thinking that it will be even more infuriating to John to know that some stranger is walking around with his beloved coat on his back. At that moment she gets a call from Tamsin, who tells her it's time to put their plan into action.

Terry's in the middle of a mud-bath threesome with a couple of prostitutes when John steps out of the shadows. John asks him what the deal was with Tom Gott and Terry says that he was paid to scare the man to death by Leo, with Darren acting as a middle-man. He also tells John that he's having trouble with the Mafia, whom he screwed over to get his hands on a Persian relic smuggled out of Iraq during the first Gulf War. He says that he needs John's help, but the next time he turns around John has vanished.

In a factory in Stepney, Gemma and the coven are finishing their summoning rite. The coven leave as the demon manifests herself in a body of flame and fury. Tamsin and her friends leave, telling Gemma that all she has to do is lure John into the factory so that the demon can attack him. Gemma wishes she were still a young girl who loved her uncle, but accepts that those days are gone.

John breaks into Leo's place and finds him and the artist celebrating Tom's death with champagne. With his thumb going crazy, John asks what Tom found out - and gets a punch in the face from Darren for his trouble. Just then, however, the cavalry arrives in the form of Terry Greaves and a great big gun. Terry pistol-whips Darren and tells John that if he agrees to help out with the Mafia problem Terry will walk John out of there safely - otherwise, he'll leave him at the dubious mercies of Darren.

Held at gunpoint, Darren gives up the truth: 10 years ago an unheard-of artist died in London, leaving behind a tonne of edgy, groundbreaking pieces of art. Darren took them all for himself, passed them off as his own work and had been living off that reputation for years. But John's distracted from this tale when he sees his own true thumb glued to the top of an installation in the middle of the room.

Back in the empty warehouse that he used last issue, John gets Epiphany to cut off Tom's thumb so that he can re-attach his own, musing that it was an odd run of synchronicity that led him back to his missing digit. They return to their flat, where John recaps the weird events they've been though and confirms that Lady Lazarus will be back some day. Just then, a telephone rings: Gemma is on the line. As the demon howls through the factory walls behind her, she begs John to come save her.

Retrieved from "https://hellblazer.fandom.com/wiki/Hellblazer_issue_279?oldid=10761"
Community content is available under CC-BY-SA unless otherwise noted.