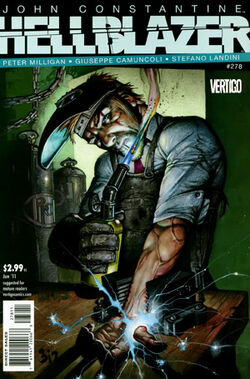 John Constantine: Hellblazer #278 (June 2011) continues the 'Phantom Pains' storyline. Constantine's new thumb puts him on the track of its original owner's killer, leaving Epiphany at the mercy of both a creepy spirit from her past and a vengeful Gemma Masters.

After welding the thumb of a nearly dead car crash victim onto the lonely stump on his hand, our morally ambiguous London mage finds his new appendage has a life of its own. Following where the stranger's restless thumb takes him, John Constantine hears a name he'd rather not. Meanwhile, Constantine's young bride, Epiphany, grapples with an old addiction and a bizarre former tutor, while John's damaged niece Gemma continues her quest for vengeance.

In a disused warehouse somewhere in London, John puts his tools on a table: a severed thumb taken from a car crash victim; an oxyacetylene blowtorch; some sulphur from Hell and a plastic capsule containing the life-giving breath of God (or a reasonable facsimile thereof). He fires up the torch, now imbued with magical energy, and gets to work re-attaching his thumb.

A few hours later, with the new thumb now welded onto his hand, Constantine arrives home to find a note from Epiphany that reads, 'Dear John, I've got to do this. I'll try not to be too long. Whatever happens, I love you.'

Over at her lab in Essex, Epiphany drops a substance onto her tongue, saying that she needs help from an unknown source. She immediately drops to the floor and opens her eyes to see an eerie woman with a painted-doll face standing above her. The woman - Lady Lazarus - chides her for calling out, saying that their arrangement is to only see each other once a year. Kneeling, Epiphany says that they can meet every 10 years instead, but Lady Lazarus is too busy opening her wrists so that her blood can drop onto Epiphany's face. Epiphany tells her to stop, but Lady Lazarus says that she doesn't mean it...

John enters just in time and tells the Lady to back off. The Lady slashes across his face, and pushes Epiphany down so she can't help him. John's not done, though, and opens the capsule containing the breath of God. Lady Lazarus, apparently horrified by the live-giving energy of the breath, flees. Afterwards, Epiphany says that she's an etheric tutor from her time at the Alchemy school, sent to live inside her as a guide. John says that this is bullshit - Lady Lazarus was just a parasitic spirit feeding off Epiphany's negative emotions. He correctly guesses that she appeared shortly after Epiphany's mum died of cancer, and tells her that she should stop calling on her.

Over in Camden, Gemma and Tamsin, the leader of the coven, are in a pub, looking through eldritch tomes for demons to set on John. Tamsin confirms that Gemma really wants to hurt her uncle, that this isn't just a cry for help, and Gemma replies that she knows what she's doing.

Back in their flat, Epiphany and John are inspecting his new digit when it begins to move of its own accord. Not wanting to be haunted by his own hand, John is ready to chop it off until Epiphany realises that it wants to dial a number on a mobile phone. John lets it, and is put through to the widow of the thumb's original owner. He tells her that he was there when her husband - Tom Gott - died and that Tom had been saying something about a fake just before he died. Mrs Gott says that she was talking to Tom when he had the crash, and that he'd become paranoid that he was going to be killed by one Terry Greaves.

Terry himself is at Leo's art studio, trying to collect the £25,000 owed to him for scaring Tom to death. Darren tries to give him some artwork worth £30,000 but Terry is having none of it.

And elsewhere, Tamsin is preparing her for the summoning. She promises that John's torture will be spiritual and emotional, as well as physical, and gives Gemma her first ritual piercing in her right cheek. She says, however, that she will need something very close to John. Shortly afterwards, Gemma calls on Epiphany, who hasn't seen her since the wedding and is nonplussed when a crazed Gemma punches her and steals John's trenchcoat from the house...