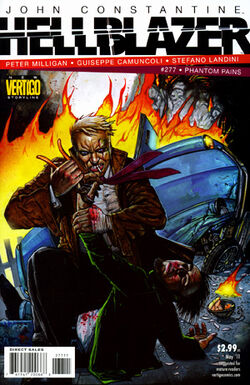 John Constantine: Hellblazer #277 (May 2011) is the beginning of 'Phantom Pains', a new storyline in which Constantine goes in search of a replacement thumb and Gemma Masters plots revenge.

As far as Gemma Masters is concerned, she was assaulted by her own uncle – by John Constantine himself! Now, she wants her revenge. Unbeknowst to John, our scruffy urban mage has more immediate concerns: his lovely new wife finds him repulsive. Or rather, Epiphany is suddenly freaked out by the sight of his thumb-less hand. This sets Epiphany on a dark journey into her past and pushes Constantine on an even darker quest along London's North Circular Road, in search of a new digit...

John and Epiphany are having sex in his flat when suddenly Epiphany sees his thumb-stump as a foaming, flowing, bloody cancerous mass and begins to freak out. It takes 30 minutes for her hysteria to end, and even afterwards she's horrified by John's severed thumb. John, not understanding what's going on, asks her to explain why she's so upset but she says she can't, and goes back to her laboratory in Essex to pull herself together.

The following day, Chas suggests to John that if the only problem is that John's missing a thumb then he could just replace it. He gives John a lift to the mental hospital where he cut off his thumb and says that he knew there must have been something wrong with Epiphany for her to marry John.

Epiphany, meanwhile, is musing on how changing her name to 'Epiphany Constantine' hasn't gotten rid of her dubious past, and puts a drop of something mysterious on her tongue. As she falls to the floor and her eyes begin to dilate, she whispers, 'I need to talk to you...'

Back at the hospital, John is having a heated conversation with a doctor, who apologises and says that the severed thumb has gone missing and there's no way for him to get it back. Darren, the porter who stole John's thumb in the first place, overhears and interjects, offering to throw John out for being abusive. John pushes past him and out the door, saying that there's more than one thumb in the world.

Later that day, Darren is talking to his boyfriend Leo - the man he gave the thumb to - and fretting that John wants his thumb back. However Leo, who has placed the thumb into an installation, is more worried about someone he met at an artists' club in Soho. Leo, having mistaken this man - a very nasty critic - for a nobody, blurted out his 'whole dark sorry secret' and now he fears exposure. Darren smiles, saying that he knows someone who's good with dark secrets.

Back at his flat, John is meditating over a map of London. His aim is to pinpoint the next nasty car-crash in the city, in order to find a 'donor' for a new thumb. Epiphany returns shortly afterwards, apologising for her freak-out, and finds John sprawled on the floor. Thankfully he's okay, and has identified 'the corner of Whips Lane' as the point of the next accident. Epiphany says that he doesn't have to do this, and asks whether they can just warn someone about the crash. But John, not wanting to upset the 'gods' of car-crashes, declines.

She then offers to drive him there but he turns her down, saying that she's not in any kind of condition for adventure. She says she'll just drive to Whips Lane and get there before him, but he says that it's not really happening there at all - he was just throwing her off the scent. He grabs his coat and heads out.

Of course, he's double-bluffing her, hoping that her lack of desire to go out in the rain will override her interest in finding out the truth. As he waits on Whips Lane, a panicked man in a fast car - the same man whom Leo met in Soho House - comes veering out into the street. He swerves to avoid a pedestrian, but fails; the man's brains spatter across the street and the car rolls into a tree before bursting into flames.

John is about to cut a thumb off the pedestrian when he sees that the man is black. Not wishing to have a two-tone hand, and hearing sirens approaching, he runs to the car. He finds the driver on the verge of death, with a gruesome green demon sitting on top of him. The demon is there to collect the man's soul, sold to Hell a year ago, but John is having none of it. Freaked out that John isn't afraid of him, the demon flees.

The driver is white, which is good news; he's still alive, though, which isn't. With the police approaching fast and in the belief that the man's a goner anyway, John snips off the guy's thumb with a tool. As he does so, the man mumbles 'Fake, fake...' The police arrive at that point; thankfully, so does Epiphany. John leaps into her car and they speed away from the crash.

Later that night, at a factory in the London area of Stepney, Gemma talks to three tattooed, body-modified women. She had sought them out years ago when learning magic and now she wants their help again, this time to raise a monster that will make John suffer. The leader, Tamsin, agrees delightedly.

Retrieved from "https://hellblazer.fandom.com/wiki/Hellblazer_issue_277?oldid=8206"
Community content is available under CC-BY-SA unless otherwise noted.