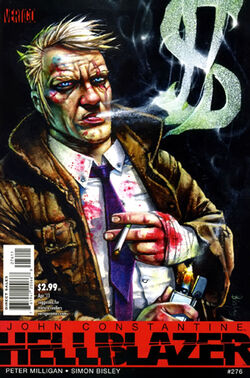 John Constantine: Hellblazer #276 (April 2011) In this standalone story a real-estate investor looking to make a quick buck gets in the way of happily married bliss for John Constantine, and learns the hard way that's something you should never do...

The issue opens several thousand feet in the air as John and Epiphany return from their honeymoon. Epiphany asks who the 'real' John Constantine really is and he sets off on a grim speech about how his friends usually end up dead or worse, which she promptly kicks him out of, telling him that anything that happens to her is not her responsibility.

A flashback to the year AD 60 as the Anglesey druid Ceangli looks upon the bodies of his clan, slaughtered by Roman soldiers. His allies tell him he must flee, but he says there is nowhere to flee to. He says that he has communed with spirits and they have given him a way to disappear into the spaces between time.

In the modern day, financial whiz-kid Marcus Molloy is being interviewed about a computer programme he's created that allows for high-frequency stock buying and selling - letting his clients buy and sell stocks thousands of times a second for big money. After the interview his colleague Jeff passes him some plans for property he's bought in Brixton, saying that letters have already been sent through to kick the residents out so it can be redeveloped.

In Brixton, John lets himself into his flat, located in that very block. Epiphany is clambering all over him, still in a post-Honeymoon haze, but John's ardour is dampened by the discovery that he's being turfed out of his flat. The next day the couple head out to view a pricey flat; John tries to haggle by claiming to have sensed a ghost in the flat, but the scam backfires when it actually adds to the property prices.

In another flashback the Roman soldiers finally come for Ceangli, but he puts his magical formula into action and disappears beyond time before they can kill him.

John does a little research on Marcus and sets up a meeting with him, selling him the same formula Ceangli used, in the form a of a computer programme. Marcus, believing that the formula will let him predict stock market changes, puts it into action in his office. But as the spell takes hold he realised that it's not the computer that's messing around with time - it's him! His life becomes a dizzying swirl of hallucinations and desires and suddenly he finds himself stepping between the gaps of time itself and coming face to face with Ceangli.

The druid, transformed into a terrifying monster and mistaking him for a Roman soldier, claws him across the face. He flees to Constantine's house, his face now changing into something strange, like that of the druid's, but Constantine turns him away. He's rushed into an emergency ward where the changes becoming increasingly rapid; his face distorts even more and then, with a messy explosion, he's gone.

The next day, John reads about how Molloy has gone 'missing' - the official explanation for something inexplicable. And thanks to his dodgy trading, his company is ruined - which means John can keep his flat. Or so he thinks. But Epiphany tells him that she got to like the idea of getting a place of their own, and John - realising he won't win this one - concedes.

Retrieved from "https://hellblazer.fandom.com/wiki/Hellblazer_issue_276?oldid=7364"
Community content is available under CC-BY-SA unless otherwise noted.