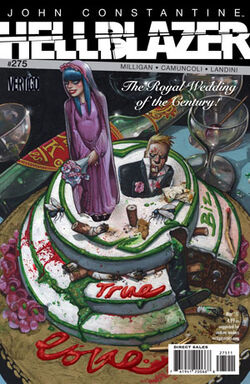 John Constantine: Hellblazer #275 (March 2011) It's time for John Constantine and Epiphany Greaves to tie the knot, but with Nergal rallying his forces, John's exes back on the scene, The Demon Constantine hatching his own plans and a vicar who barely knows what planet he's on, what chance do they have?

Lacking many friends and wanting to know all about the man she's marrying, Epiphany shops for dresses with Chas Chandler's wife, Renee, who has loathed John for years. The two leave the shop, unaware that The Demon Constantine is on their trail...

Later that night, John has hit the tail end of his stag do and is drinking with Chas, Faeces McCartney and the ghostly apparition of Brendan Finn. Faeces is trying to convince John to call off the wedding, arguing that it'll rob him of his edge. John tries to prove him wrong by magically refilling their glasses, but the spell goes awry and leaves all four men sprawled on the street. Brendan and Faeces help Chas home while John stumbles off - only to run straight into Kit Ryan, one of his ex-girlfriends.

On the roof of their old school, Epiphany and her bridesmaids are knocking back their third bottle of champagne. They swap stories about their childhoods - their fathers, all gangsters, had collectively planned to blow the school up when they got poor grades - before Epiphany describes the wedding rings. She says that she thinks the weird skull motif is a test, to see whether she's ready to marry someone as weird as Constantine. One of her friends asks whether she is and Epiphany stops to think...

Elsewhere, Terry Greaves and Stevie are meeting up with O'Reilly, who's working with the Afghan gangsters that have been giving Terry a headache over the past few months. Terry slips them a briefcase full of money to call a truce while his daughter gets married then heads off. After Terry's walked away Nergal appears behind O'Reilly and his men and tells them to drop the money - they'll be working for him now...

Back on the street Kit asks why John is marrying Epiphany. John says that Epiphany is more accepting of the weird stuff in his life - and that he loves Epiphany differently. In fact he loves her more. 'Break it to a girl gently, why don't you,' quips Kit.

The following day, John is having a pre-wedding shave when The Demon Constantine walks into his bathroom, complaining that John is wandering around enjoying himself on Earth while he's stranded in Hell. The demon decides he'd rather take John's place and beats him to death.

In the London Underground John's niece, Gemma Masters, looks at her invitation and recalls a conversation she'd had with her counsellor. She'd spent the last few years trying to get out of the occult and was worried that seeing her uncle might draw her back into it, but eventually decided to attend the wedding anyway. As she comes out of her reverie, she sees her uncle's ghost lurching across the tracks towards her before vanishing.

Rain pours down on an old, deconsecrated church as the guests enter for the wedding. The Demon Constantine, impersonating John, arrives late and heads inside. As the ceremony begins, John's ghost sees what's happening and flies off. Inside, Gemma - sensing that something is wrong - tries to get the wedding called off but Kit talks her down. Just then a group of Afghan gangsters possessed by Nergal invade the church, followed by Terry's men. As fights kick off and petrol bombs explode, The Demon Constantine tells Reverend Greene to hurry up the ceremony. Epiphany and the demon kiss, and the reverend pronounces them man and wife.

Back at his home, John re-inhabits his body and gets up.

At the Holy Ghost Pub next door to the church, the - apparently unharmed - wedding-goers are enjoying food and drinks. Epiphany greets her uncle Pat, who's escaped from prison partly to see his niece married and mostly because Julian - the demon who killed John's last girlfriend - is plotting something evil there. Before Pat can elaborate Kit walks over and introduces herself to Epiphany. They exchange pleasantries and Kit asks if Epiphany knows where Gemma is.

Gemma, it turns out, is in the toilets having a cigarette. The Demon Constantine enters and, still pretending to be John, tries to seduce her, eventually forcing himself on her. Seconds later he flees the toilets, horrified at his own actions. Chas asks what the matter is and The Demon Constantine says that he 'thought it's exactly what she wanted'. Chas has no idea what he's talking about and lets the demon flee.

Outside, Epiphany - now looking for Gemma - is accosted by Nergal. He declares that he's going to murder Epiphany in exchange for Astra, the little girl's soul that he had claimed but that John freed from Hell. But before he can finish the job, Nergal sees the wedding ring. It turns out that Aleister Crowleyhad crafted it specifically to repel Nergal. Nergal drops Epiphany just in time for The Demon Constantine to arrive. He immediately attempts to bind and destroy Nergal but the demon is too fast and rips out his heart, sending him to Hell.

As he gloats, the real Constantine steps up behind him and thrusts his hand into the demon's back. He announces that he knows Nergal's newest name, the one he gave himself to make Gloria's death even more humiliating: 'whore killer'. With the names spoken, Nergal is properly bound and John is able to rip out his spine, killing the demon once more.

Back in the pub, John explains to Epiphany about how he'd been killed and had to force his soul back into his body to save her - and how that means they're not actually married at all. He proposes to her again and she immediately accepts. Minutes later the guests are back in the church and John and Epiphany are finally truly married. As Chas drives the happy couple away, Gemma staggers out of the pub's back alley, face cut and streaked with tears, and swears vengeance on her uncle...