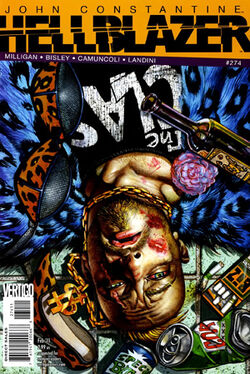 John Constantine: Hellblazer #274 (February 2011) John Constantine retrieves Epiphany just in time for both Nergal and Terry Greaves to make attempts on his life.

The issue opens in the modern day with a shivering, bearded man nervously looking at the flies that are swarming around him, attracted by the strawberry jam smeared all over his body. The man has apparently been tied up by Beano, former drummer for John Constantine's band Mucous Membrane, and an unnamed colleague. Beano tells the man, who seems to think that he is Gary Lester, that they're going to summon a demon...

In 1979, John Constantines old and young are having a face-off. Young John tries to convince Epiphany to stay with him, but she refuses and old John clocks him in the face. The couple head back to the present just in time for a pair of doctors from Ravenscar Secure Facility to arrive in order to take him back.

Old John and Epiphany land in the modern day on Vauxhall Bridge, where young John began the sex magic ritual. John wonders why he can't remember Piffy's appearance from his own past and concludes that he must be on a subtly different timeline - or, as Epiphany points out, he's just messed up from the booze. Just then, Chas - possessed by Nergal - comes roaring over the bridge towards the couple. A synchronicity spell John had worked up before he went back in time kicks in and the cab swerves suddenly, sending Chas flying through the windscreen.

In hospital, a furious Chas tells John that the crash crushed his crotch - his wedding tackle will be out of action for six months. Chas's wife, Renee, arrives and is as furious as ever with Constantine, but even she is shocked when Epiphany gives her and Chas an invitation to their wedding - and says John wants Chas to be his best man.

John and Piffy make it back to his pad, aware that Terry Greaves's boys have tailed them. John tries to get Epiphany to take some of his blood to protect her from Nergal, reasoning that it worked for Angie Spatchcock, but she refuses. She heads to his kitchen and finds Gloria's heart in John's fridge - he says that he's keeping it for its powerful properties. She starts to ask him about the succubus but he distracts her with the wedding rings, then tells her he has to prepare before Terry and his boys arrive.

They do, of course, only to walk into a magical trap that pulls guilt up from the pits of their souls and causes them to suffer hallucinations. While his thugs freak out on the floor, Terry - followed by the 'ghost' of his wife, prepares to jump from John's balcony. Piffy forces John to get him down, saying that she doesn't want her dad to die, and Constantine does just that. Later, as an ambulance takes away Terry's traumatised men, John says that he'll help Terry deal with those Afghan enemies of his - if Terry agrees to let them marry. He does, and soon letters are going out in the mail; invitations to John's surviving friends and family, including Gemma Masters and Kit Ryan.

And a final card arrives in Surrey, at Beano's house, where 'Gary' is still tied up. As Beano wonders what the hell John is playing at, the flies around 'Gary' begin to coalesce into a human-shaped form. That form looks oddly like John Constantine - but with blank white eyes and a scar on the wrong side of his face. This second Constantine has already killed 'Gary' and makes short work of Beano before finding the invitation to John's wedding lying on the floor.

Retrieved from "https://hellblazer.fandom.com/wiki/Hellblazer_issue_274?oldid=11340"
Community content is available under CC-BY-SA unless otherwise noted.