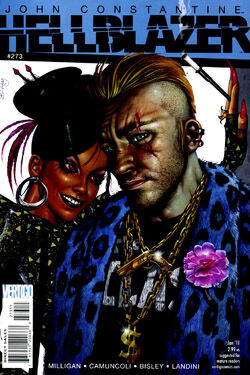 John Constantine: Hellblazer #273 January 2011) continues the 'Red Carnations' arc. In the present day John Constantine squares up to Gloria and Terry Greaves, while in 1979 Epiphany tries to convince a young Constantine to send her home.

Constantine comes around from his drunken stupor to find Gloria riding him. Once he realises she's not Epiphany he throws her off him and, despite her protestations that their night together proves he's not worthy of the girl, kicks her out of the house. Once outside, he finds Terry Greaves waiting for him in a limo. Terry 'invites' John for a ride and, not seeing any other option, John gets in. Nergal arrives just as Terry's car heads off and asks Gloria why John hasn't been reduced to a drooling sex slave. Gloria says she's glad Constantine had enough mettle to withstand her seduction and refuses to do any more of Nergal's dirty business. Nergal grins and pulls her into John's house.

In Terry's car, the gangster explains to John that he's having trouble with some Afghani criminals muscling in on his territory - criminals that are too hardened to be scared off by anything short of real-life magic. Constantine says that he's not interested and that he's got more important things on his hands. Terry wonders whether those things include Epiphany, who's not called him in ages. John fobs him off and heads back home - taking Terry's 30-year-old malt with him.

Back at the flat, Constantine has enough time to wonder where Gloria is before he sees the bloodstains on his wardrobe. He opens it to find Gloria, her chest torn open and heart ripped out, but still alive. She begs him to end her pain and he does, noting that her mutilation was just a warning to John from Nergal.

After disposing of Gloria's body, John prepares a ritual at the 7/7 bombing memorial. When Gloria was seducing him, she awoke an old memory of his - and gave him an idea of how to contact Epiphany. He enacts the ritual as a glowing light surrounds him...

Back in 1979, Epiphany watches as John turns away his sister, Cheryl, and her then-infant daughter. It seems that Cheryl's fallen out with her husband and needs somewhere to stay. John slips her some money for a hotel and she heads off - but not before telling Epiphany to be careful of John. As she heads off, Epiphany tries to find out what John thinks of children, before changing the subject to a cure that she'd whipped up for Malcolm Campbell's demon. The concoction works, and after the exorcism Epiphany offers to give him the recipe in exchange for passage back to the modern day. John demands to know more about the man she's going back to...

A couple of hours later, she's told him. John nervously asks for more information about his future self: what he'll be like, whether he's got religion, etc - but she keeps quiet. After some more chatter, John agrees to send her home: he cooks up a sex magic ritual at key points across London, creating a circle around the point where she appeared: the spot at which the 7/7 bomb memorial will one day stand. As Constantine completes the spell, a doorway opens and the modern-day John Constantine steps through...