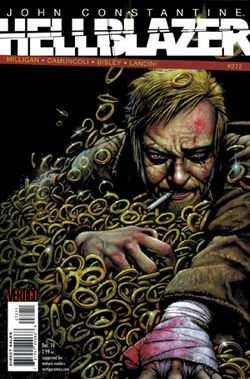 In Islington, 1979, Epiphany Greaves finds her mother, Brenda, drinking in a bar. Brenda died of lung cancer when Epiphany was nine, and had suffered years of martial abuse from Epiphany's father, Terry, before that. Seizing her chance, Epiphany tries to tell Brenda what she's letting herself in for, but Brenda gets the wrong idea and thinks that she's one of Terry's mistresses. Just at that moment, he arrives back from prison in a friend's car. The resulting argument sees Terry hitting Brenda. Realising that she's made things worse, she runs off.

Five nights later, Epiphany's tracked down the young John Constantine to a London dive bar. Trying to impress her, he takes her along to an exorcism while she explains that she's from the future. He takes it better then she expects, but even at this young age he's no stranger to the strange - as Epiphany discovers when he introduces Malcolm McLaren (nee Campbell), a failed reggae singer possessed by an African demon. John botches the exorcism and Epiphany offers to mix up an alchemical cure to help out - but after picking up the ingredients the two end up sleeping together instead.

Back in 2010, Constantine is still plummeting from his flat's window in an effort to contact Shade. He manages, briefly, but Shade only tells him that Epiphany is gone - not where - and lets John fall.

As it turns out, Gloria the succubus is standing right where he lands. She helps him up and offers to put him to bed - with benefits - but John's not having any of it. He threatens to put a hex on Gloria to make her frigid and she agrees to tell him everything. Back at John's flat she tells him about Nergal's threats to destroy her life if she didn't seduce John. She begs him to hide her from Hell the same way he did with another succubus, Ellie, and he offers to think about it overnight.

That night, with Gloria asleep on the couch, John gets royally drunk and chalks a protective circle up around his bed - just in case. But it turns out that he hit the bottle just a little too hard and failed to complete the link - leaving himself unconscious and open to attack. Gloria pleads with Nergal to leave John alone, but he refuses to relent and, regretfully, she drops her clothes, enters John's circle and straddles him...

Retrieved from "https://hellblazer.fandom.com/wiki/Hellblazer_issue_272?oldid=7117"
Community content is available under CC-BY-SA unless otherwise noted.