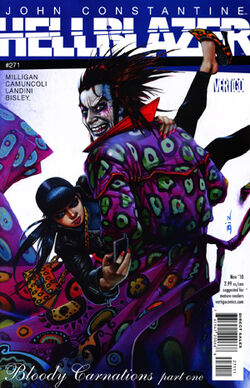 John Constantine: Hellblazer #271 (November 2010) continues the saga of John and Epiphany. As Epiphany struggles to escape the affections of Shade the Changing Man, John tries to locate her and Nergal complicates matters by sending a succubus after him.

While John gets a reading of his future from Joe, an elderly, disgraced gentlemen's haridresser and professional oracle, Epiphany and Shade are holed up on Shade's home planet of Meta.

Shade is supposed to be repairing the damage done to Epiphany's face, but when he peels off the bandages she realises that he's transformed her into Kathy George, his lost love. Worse, they're not on Meta at all, but on 'Kathy World', a planet that the obsessed Shade has been crafted using his control of The Madness.

Epiphany demands to be returned home, but Shade is having none of it - he wants her to literally become Kathy George, and gives her a copy of the woman's diary so that she can study it and begin the transformation. He binds up her legs and slopes off, while Epiphany realises that he's as controlling and crazy as her father.

Back in London, John muses on what Joe told him: that marriage to Epiphany might be his last chance at happiness. He picks up a pair of occult wedding rings from an associate, Gilbert, then heads back home and begins painting Shade's circle symbols on the wall in an attempt to bring the madman back.

Elsewhere, football team Chelsea are mid-match and one of the player's wives is convincing a friend to go in for plastic surgery. The woman is, it turns out, a reformed succubus named Gloria - and is none too pleased when the demon Nergal appears next to her.

It turns out that Gloria was expelled from Hell to Earth and has since gone native. But now Nergal wants her back on his team. He explains that John's marriage to Epiphany could finally mean that his soul is less tortured - something Hell cannot abide - and so he wants Gloria to seduce him in the hope that it will distract him from pursuing Epiphany. Gloria points out that Nergal's not too great at psychology and refuses, but Nergal tells her that he will destroy her life if she walks away.

Back at his flat, Constantine realises that he needs to do something truly crazy to ping on Shade's radar. He gets a run-up and leaps through his window...

And on Kathy World, Epiphany finally seems to have accepted her place as the new Kathy George. But it's all a ruse to trick Shade so that she can escape. Shade catches on and, irritated, teleports her back to Earth. Epiphany gets up, her face now restored, and flags down the nearest person - who turns out to be a now surprisingly young-looking oracle Joe. She asks where she is and he tells her: London, 1979!