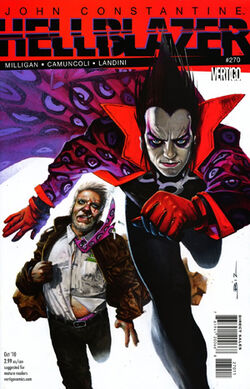 Hellblazer #270 (September 2010) concluded the four-part 'Sectioned' storyline. John manages to get to the root of his madness, just in time for Shade's own particular brand of crazy to make things even worse.

Constantine is freaking out about Epiphany, furious that he never told her what she meant to him, when she suddenly comes back around. She's alive, but not well - as Shade discovers when she vomits all down the front of his chest.

As John and Epiphany explain what's been happening to each other - he's crazy and she was unconscious after messing up the dosage in another alchemy experiment - Shade inspects the paste that Epiphany put on her face, musing that the girl looks a little like Kathy. He rubs it onto his own face and comes out in the same scars and burns, finally understanding what happened to the concoction.

Up on the roof of the building Epiphany asks John what she means to him, but they're interrupted by Shade, who has repaired his own face. He explains that The Madness - the reality-warping insanity that Shade controls - was affected by his jealousy for Constantine when he arrived, and it infected the paste. Because Constantine liked Epiphany's face The Madness decided to destroy it. Epiphany says that she's surprised it wasn't Carew, the young man who'd fallen in love with her. John, upon hearing this, has a flash of inspiration.

Epiphany makes a call to Carew saying that she wants to see him and the mad boy races over to see her. But instead he finds Constantine, who hypnotises him into thinking that he's in Hell. He takes Carew up onto the roof and says that he'll him if he explains what he's done. Carew agrees. Downstairs, Shade asks Epiphany if John ever mentioned Kathy George but Epiphany says no. The Madness explodes out of Shade once more, filling the room with boxes of Kathy's things. As Shade frets, Epiphany asks where Carew is...

...and it turns out that he's dead. His heart gave way due to the stress - something that also relieved Constantine of 'The Whispered Curse' that Carew had placed on him. A curse that was primed to go off in John's head the moment he began to have any feelings for Epiphany. Epiphany says that she's gutted that her face got scarred the moment Constantine had feelings for her, but he says that he wants her anyway. Shade, however, makes a counter-offer: go with him to his planet, Meta, and he'll repair the damage done to her face. John proposes to Epiphany, but the girl apologises and walks off with Shade, leaving John alone.