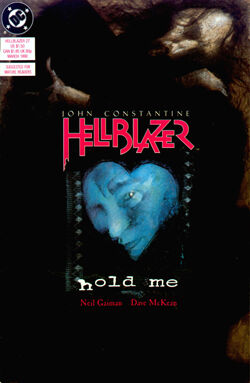 John Constantine: Hellblazer #27 (March 1990) A memorial party for Ray Monde leads to a bizarre night for John Constantine, when the ghost of a lonely homeless man makes a desperate request.

Under the comfort of a dark London night, a man named Fat Ronnie and a woman, Sylvia, are wandering the streets. They're both drunk, which is why they don't notice the scruffy and dirty man named Jacko following them. They do, however, notice that it's become unseasonably oddly cold. Fat Ronnie decides that it's too cold to be out on the town and decides that they should retire to warmer environments. Once they reach the small flat near the bridge they begin to tear the curtains and huddle under them to try and get warm. Again, they don't notice Jacko, who's curled up beside them as they continue to cuddle up with each other, desperately, for more warmth.

John Constantine hails a cab that evening, reflecting on how cold it is this spring. Climbing inside, he continues to think of some of the more interesting traits that the autumn weather brings with it, one of which being the beautiful girls that vanish when it turns cold in London. John remembers chatting with the cab driver, telling him how the pretty ones in summer dresses were like butterflies. That cabby must have been either a poet or horror writer, John thinks. This one turns out more like a National Front recruiter. The cab driver vents his spleen to an irritated Constantine who, after hearing as much as he can, decides to get out. Paying the man he starts a walk to Hawthorne Road with a smart ass tip to the driver.

On his way to a party thrown by friends of Ray Monde in memory of his death just a year ago, John remembers that Ray always liked a good party. His memories are interrupted by a passing stranger who asks for a cigarette. John obliges and asks the man if he's homeless. It turns out he is, and so are many others on this side of London, it seems. Just a few nights previous, the man was beaten by drunks. An understanding Constantine gives the man a few quid and some cigarettes before he's on his way. He didn't think there were this many homeless in London anymore. John arrives shortly to the party where Jeff, the host, greets him, enthusiastically. Jeff's a bald, black man and seems to know him quite well. He tells John that he should grab a drink and come with him to meet someone, who turns out to be a woman named Anthea who was a friend of Ray. The two have a conversation and John begins to wonder why it's so hard for him to have fun at parties in his older age. With that he thinks of Ray, apologises for his death and asked if he knew it wasn't his fault.

Elsewhere, a mother's child cries from the bedroom. She calls to her mother, frightened by a smelly, dirty man in her bedroom. The frustrated mother turns to reassure her daughter, Shona that no one is in her bedroom. She panics as she sees the looming Jacko making his way toward her. He is also crying out for her, telling her that he is so cold and wants to be held. Terrified, the woman tries to get away but Jacko is already close enough to grab her and he tries to embrace her. Screaming and fighting, the woman is hugged tightly and she begins to grow cold. Jacko soon leaves the woman dead on the floo. The child comes to her mother's side, wondering now why her body is so terribly cold.

Inside the bedroom John gets more comfortable with Anthea, but is still trying to figure her out. The conversation turns to the personal when she asks him if he's had an AIDS test. When John informs her that he's not HIV positive, she decides to drop the topic, suddenly, and asks him to walk her home. A slightly puzzled Constantine agrees. As they arrive at Tower Estatem John wonders what's this woman on about, but then decides that his paranoia getting the better of him. She tells John that she manages a shelter for people who have nowhere else to go. Runaways, the homeless, drunks, and even some mentally unstable are housed there, temporarily, because the authorities don't have a place for them. John notices the halls around the lift are already beginning to smell like fungus. His curiosity gets the best of him and he wants to know the story behind the smell. Anthea tells him that about six months ago the smells began and were getting worse in room 512, so she and Sara phoned the police. When they broke in, they found two dead tramps under a curtain that had been there for months and had to be scrapped from the carpets. John says he'd heard worse and the pair head inside her flat. A man stands watching, just a few yards away.

Anthea puts on some music and offers John something to drink. It seems Ray told her a lot of good things about John before he died, even what he likes to whet his whistle with. The music turns romantic and John wonders what exactly is going on. He asks more about this woman Sara that she mentioned. Sara is Anthea's flatmate and, just before John remembers something Ray said to him in the past, she asks for a kiss. He looks a bit confused and taken because he's just figured Anthea is a lesbian. After a demand to know what all of this means, Anthea begins an explanation. Sara and Anthea want to have a baby, but since the AIDS virus is spreading so quickly around that it's hard to find someone that is able to be eligible. When Anthea heard all the good things Ray had said about John she asked the party host, Jeff, for an introduction. She figured she would have told him afterwards. With a small look of concern she asks him if he's angry. In light of recent events with the Swamp Thing and Abby Holland, John's anger level is considerable and he raves about why people believe he is some kind of a walking sperm donor. He leaves, telling her she could have just asked him.

Outside, John makes his way out of the complex with little luck in direction and the smell around him getting worse. The sight of a little girl grabs his attention and he goes to her. He asks for her name and she gives it to him in between her broken sobs. The little girls name is Shona. She goes to explain that a smelly man came through her window and hugged her mommy and "now she's all cold." John reassuringly asks her to show her where she lives so he can check it out. She agrees and they start the walk together. Once they get there it doesn't take much for John to know that she's already dead and the extreme temperature of her body unnerves him, knowing that it isn't natural for a woman to be so cold (she seems like she was dragged from a freezer) only a few hours from her death. Anthea gets a knock on her door, shortly after. At first she's angry that John has the nerve to show up again. He quickly asks her to watch out for little Shona so he can check out the flat.

John, with little success of using the practical method of breaking in with a folded paper clip, kicks the door open. The smell inside makes him want to vomit and he covers his face quickly. He thinks that he should be on his way home, but is staying for reasons unknown to his good sense. He shouts, thinking someone might still be here, and then remembers how cold it is. To his left, an ominous form makes its way towards him and John takes immediate notice. It speaks in mumbles and mutters, asking John to hold him. Constantine asks for his name, knowing it to be some kind of ghost or perhaps a spirit. The man tells him his name is Jacko and goes on to say that he's so cold and nobody cares. He once again asks to be held. John attempts to grant the man his request and the two embrace, John saying he's freezing and smells like dead abattoir. Jacko's muffled speech hits Constantine's ear. He thanks him, telling him he doesn't feel so cold anymore.

With that, the spirit passes, leaving John hugging nothing but the air in front of him. The reaction is mixed, though, and John feels like he's going to be sick. He grunts and moans as he makes his way out of the room. All the man wanted was to be held, just to feel the warmth of human compassion so he could move on. He thinks this all out as he moves to Anthea's door again. Even if the man couldn't feel human compassion anymore, he could still ignore his cold death. The feeling that even though the dark things and nightmares of the world still exist, we don't feel them when we have something or someone to hold onto surfaces to John and he knocks on Anthea's door once more. Anthea opens it and ask why John smells so awful. John immediately interrupts her, asking her to just hold him.

The two hold each other under the blanket of London's night.