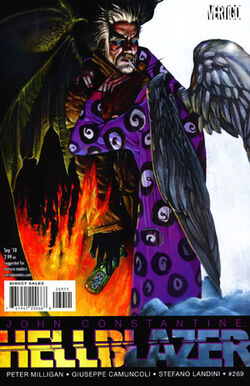 Hellblazer #269 September 2010) continues the four-part 'Sectioned' storyline. Constantine has succeeded in summoning Shade the Changing Man, but their escape from the madhouse will be anything but simple.

The issue begins with a flashback to the first 'adventure' that Constantine, Shade, Lenny Shapiro and Kathy George shared. Kathy and John kiss just as Lenny and Shade arrive - something that makes Shade absolutely livid. Back in the present, Constantine is kissing Shade, at Shade's demand, and getting a sense of how the man has changed: he's jealous, bitter and twisted. But, as promised, Shade teleports the three of them out of the compound. Lenny asks to go home but Constantine persuades them to join him for a drink first.

In a local pub, Constantine and Lenny banter until she sarcastically comments that Kathy used to find him sexy. Suddenly overcome by The Madness, the insane force that powers him, Shade overturns the table. As John and Lenny pick up the glasses, he comments that helping John is beyond his abilities - he's not afflicted by any mundane form of madness. But Constantine refuses to let him give up that easily. The two are about to square off in a magical duel when Lenny steps in and defuses the situation. She asks John why he cut off his thumb and he suddenly remembers hitting Epiphany.

Epiphany, meanwhile, is doing some hitting of her own. Blaming Carew for the scars she sustained when her healing paste went wrong, she slaps him around his own home until he cowers in a corner and says that he deserves it for not winning her heart, and that he'd loved her ever since alchemy school. Epiphany, realising that he didn't damage her face, stops listening to answer a call from Constantine. She accuses him of ruining her healing paste but he denies it and says that he'll head right over.

After Shade teleports Lenny back to America, John asks to be taken to Epiphany's. But Shade says that he's only there according to his own will, not John's, and if Constantine wants any more help he'll have to do Shade a favour: bring Kathy George, his former lover, back from the dead. John, having had his fill of resurrection potions, tells him to get stuffed and heads outside - only for him to undergo the same hallucination of London falling apart that he saw before. As he freaks out, the barman flags down a passing police car...

In a tiny art studio somewhere near London's financial district, the nurse that stole John's thumb is selling it to the studio's owner. The man, Leo, is so delighted that he decides to suck it, reasoning that, 'Every artistic genius in history has a little madness in them. It's about time I joined them'.

Back at the pub, the police officers are restraining Constantine when Shade leaves the building. He tells the police to step away from John and when they refuse he teleports himself and John away, leaving the cops grasping at each other and with their underwear mysteriously swapped.

Shade has brought Constantine to 'nowhere', a place between worlds where consciousness takes physical form. Constantine sees Carew saying the words 'I know what you need' and Shade disappears. His voice remains, though, warning that unless John helps him bring back Kathy he will leave him in nowhere for eternity. John tells Shade about his disastrous attempt to resurrect Phoebe and Shade says that John should have taken Kathy from him when he had the chance. John suddenly realises the source of Shade's unhappiness: jealousy over the kiss that he and Kathy shared decades before. John tells him that the kiss didn't mean a thing.

Shade cries a little and agrees that he should let the dead rest. Then he teleports them to Epiphany's place. But when John arrives at her lab, he finds her sprawled out on the floor - dead!