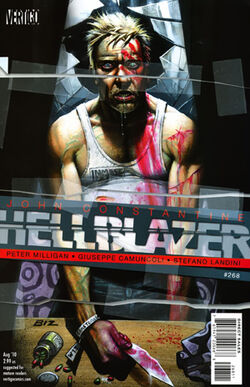 Hellblazer #268 August 2010) continues the four-part 'Sectioned' storyline. Constantine summons Shade the Changing Man to Earth to help him escape the madness that's consuming him, while Epiphany has a nasty experience with one of her cures.

As the staff try to deal with the bizarre events happening around them, Constantine desperately tries to summon Shade. But it doesn't happen fast enough, and soon he's been taken down by a team of porters and a needle of anaesthetic.

Meanwhile, Epiphany is applying a healing paste to her face when Carew, the purple-suited man seen in John's hallucination in the previous issue, enters. It turns out that he snuck into the place when Chas called around and he's glad that Epiphany is no longer hanging around with Constantine. Epiphany, furious that he's broken in, gives him a swift kick to the testicles and sends him packing, despite his protestations of love.

Back in the hospital, Constantine's worse than ever, paranoidly ranting about the dangers of dust and plastic. By the time the porters arrive he's progressed onto fearing everything, from the colour red to fat fingers. He's held down and given another injection...

In America a teacher named Lenny Shapiro is about to take a group of kids around an art gallery when Shade's circles begin to appear on her hands. She is immediately pulled through a wormhole where - much to her annoyance - Shade tells her that she will be his anchor to arrive on Earth. It emerges that she and Shade knew each other a long time ago.

Back in the UK, Constantine has finally focused his obsessive fear onto his arm. Pretty soon the porters are on him again, but this time he slips through their grasp and takes their keyring for good measure. He locks them in the room - using just his right arm - and makes his way to the hospital's kitchen, where he grabs a knife and starts hacking at his arm. But he can't quite bring himself to cut it off entirely, so - locked in the kitchen's meat freezer - he makes a smaller gesture and starts slicing into his thumb. As the thumb flies off, Shade's circles appear on the catatonic man again...

Over in Essex, Epiphany's day has got even worse: the paste she'd prepared didn't heal her fact, but actually scarred and melted it, deforming her even more. She begins to wonder whether Carew might be so jealous as to sabotage her concoction.

John wakes up in the hospital's infirmary, where a doctor tells him that they weren't able to graft the digit back onto his hand as his blood rejected it by repeatedly congealing and changing. Constantine blames it on the demon blood in his system and demands to know where his thumb is. But the digit's already gone, carried away by one of the porters, who's in league with someone on the outside.

Back in the hospital the human vegetable, now fully controlled by Shade, stands up and wrenches the window frame out of the wall with his bare hands. On the other side is Lenny, who heads into the building to find John. John recognises her from a previous meeting and she leads him outside, warning him that Shade is different now - darker and more dangerous. She takes him to a tree, from which Shade's body is projecting. He tells Constantine to kiss him. John, baffled, can only ask: 'On our first date?'