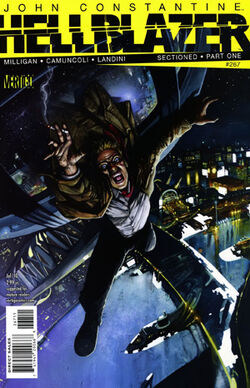 Hellblazer #267 July 2010) begins the four-part 'Sectioned' storyline. Gripped by a sudden and violent madness, John Constantine finds himself calling on a very unlikely and dangerous ally.

Epiphany's lab has become a disaster zone as Constantine races through it, tossing test tubes and papers to the ground. Furious, he accuses her of dosing him with a love potion. When she tells him to get out, he punches her in the face. And keeps on punching.

Suddenly he's awake in his bedroom with sore knuckles and a thumping headache. He staggers out to the bathroom but when he opens the door he finds the world falling away beneath his feet - literally! The building is vanishing into thin air and even his magic won't stop it. John makes it out onto the street, where he realises the same thing is happening to the entire city, people and all. He calls Chas and says that somehow the effect is linked to his beating Epiphany to death. The ground gives way beneath John's feet and he finds himself hanging on the edge of a huge expanse of nothing. A purple-suited man says that he could help him up... but then stands on his fingers instead and lets him drop into oblivion.

John wakes in a mental hospital. The whole thing, it turns out, was in his imagination - much like the grotesque, warped vision of Epiphany by his bedside. It taunts him until a doctor administers a sedative and John goes out like a light. The doctor is Naomi and her colleague - and former lover, apparently - is a man named Giles. Giles grabs Naomi's rear and tells her that he wants to have sex with her in the catatonic ward but she brushes him off and the pair leave.

Epiphany is thankfully still alive, but her face is battered and her top lip torn. She can't even manage to smile properly any more. A caller at her door turns out to be Chas, who's looking for John. He mentions that Constantine was talking about London disappearing beneath him and this fact jogs something in Epiphany's memory. But she can't handle talking about Constantine right now and shuts the door in Chas's face.

That night Constantine hypnotises a nurse into letting him in to the catatonic ward where, coincidentally, Naomi and Giles are having sex in front of a human vegetable. Constantine steps into a side room and draws a series of circles on the wall before putting his hands on it and performing a spell. In her lab, Epiphany sees the same patterns forming in an alchemical paste she's making to heal her face. And in the catatonic ward, Naomi looks up mid-coitus to see that she is actually having sex with the brain-dead man, who's also smashed that Giles's head open.

Oblivious to this, John continues his ritual, calling upon the master of madness: Shade the Changing Man!