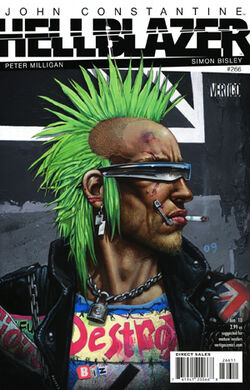 Hellblazer #266 June 2010) concludes the two-part 'No Future' story. As Constantine tries to work out what Sid Vicious's spirit is doing in a mannequin, undead forces in the Conservative party move against him.

As James and his undead paymasters scheme to get someone with real cunning on their side, Constantine surprises Carl and Epiphany with a sudden appearance. Carl, freaked out, heads off while Constantine tells Epiphany that he's decided to look into the whole weird situation - and he needs Epiphany to give him a suitably punk look.

Later, with his new punk threads on, Constantine goes to visit Faeces again and announces that he's in a mood to fight the power once more. After three nights spent haunting a punk pub, Constantine finally tracks a lead down to a Thai massage parlour. There he finds a former Tory MP who - after a little coercion - says that he left the party after discovering that the higher-ups were 'something more evil' than traditional politicians.

Two days later, Epiphany and Carl find Constantine in the punk bar. Epiphany ribs John about why he won't sleep with her and Carl jealously smashes a bottle over the back of John's head. In retaliation John tells Carl that his dead mother is watching them, and is still disappointed in him for stealing money from under her mattress as she was dying. As Carl freaks out, James listens in...

Outside Epiphany tells John off for being cruel to Carl and John says that she was just using the kid anyway. Epiphany asks if Carl's mother was really in the room and John says that she wasn't - he'd picked up that bit of information while doing some background checks on the pair of them. Epiphany clocks him in the face for spying on her then heads off. As she does so, James approaches John and offers him a position with his employers.

John is blindfolded and driven to a crumbling mansion for a covert meeting with the Conservatives. There he discovers that they believe that they will win the next general election - something that may lead to violent conflict on the streets. They're recruiting from The Vicious to pre-emptively build up their armies. And they're targeting punks because their anarchistic ideals aren't too far from the Tories' own lassez-faire capitalist ideals.

John asks the corpses what their deal is and they explain that the return of old Conservatism has also reanimated them and that the party has long contained undead, potentially demonic figures such as them.

Back at Faeces' house, John explains that the creatures are old, pre-Christian spirits that float around looking for something to attach to, a dead personality to adopt, and that whatever's in the 'Sid Vicious' mannequin may be one too. But the spirits don't like to be separated from each other, so Constantine lets the Conservatives know that one of their own is in Faeces' house and pretty soon they, James and another Tory thug are in Faeces' home.

As Faeces cowers, John tells the mannequin that he's not Sid Vicious at all, but an old and lonely spirit trapped in an effigy. The Conservatives totter forward and ask him to join them, but 'Sid' is sickened by the thought of being a Tory at heart and the mannequin springs to life, roaring with unholy anger. It blasts the room with power, sending everyone flying. John smashes his head on the floor...

...and wakes up in a flashback to his punk days. He's standing on a bridge by Camden Lock, drunkenly mumbling about how terrible it is that the Conservatives are in power. He clambers up onto a railing and gets ready to kill himself when Faeces runs over to talk him down.

John wakes up again in Faeces' house. He and Faeces are the only survivors: the spirits have left the Conservatives' corpses, and James and the other thug are dead. Constantine says he's giving up on fighting the power. He's too cynical to care any more. He pulls on his trenchcoat and walks away from his old life forever.