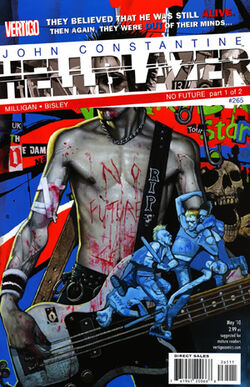 Hellblazer #265 May 2010). Back in England, Constantine's gloominess is punctured when he discovers that an old friend is keeping Sid Vicious in his closet...

The issue begins with two men discussing a punk named Viper who had firebombed a 'leftie activist' but the hung around the scene of the crime too long and is now wanted by the police. The men turn out to be James, a young man, and a mysterious, shadowy figure who is surrounded by flies. The old man says that James needs to take care of the situation. We can see that other figures, also fly-blown, are sat in the room.

Meanwhile, Constantine and Epiphany are hanging out at John's place. He says that she should go back to her father's, but as she starts to complain the phone rings. The caller is one Faeces McCartney, a friend of John's from his punk days, who says that he has something exciting to show. Epiphany drives John to Faeces' place, where the crusty old punk explains that long-dead Sex Pistols bassist Sid Vicious is in his house - and he's not feeling well.

On the Isle of Dogs, Viper is holed up in a rotten old council flat waiting for James to send for him. He composes a letter to his friend Carl, saying that the men that he'd met - the ones seen at the start of the issue - will soon be running the country from behind the scenes. And when they do, they'll need men like Viper to keep people in line. He signs off: 'The Conservatives are coming.'

At his flat, Faeces introduces John and Epiphany to 'the Vicious', his anarcho-punk collective. Epiphany tries to make John jealous by shacking up with a young punk named Carl, while Faeces takes the mage off to meet Sid. Sadly, Sid turns out to be a mannequin with a punk haircut and some trinkets formerly owned by the real Sid Vicious draped around him. John's disgusted until the spirit inside the mannequin reaches out and touches him, bringing back memories of his own punk days. Faeces says that Sid's spirit is fading and that his followers are slowly drifting away.

Back on the Isle of Dogs, Viper opens his door to find John Constantine's face leering back at him. As Epiphany waits for him outside, she sees James and a crew of three neo-Nazis entering the building. John, unaware, uses his powers to dredge up some bad memories from Viper's childhood and says he'll keep them a secret if Viper spills the beans. He asks why the kid left Faeces' gang and Viper says that Sid's become pathetic and he's far more interested in the offer the the Conservative party made him. He says that he's one of the boys with the guts to deal with the unions and the 'lefties' while the old boys talk politics. Constantine says the right-wing despise punks, but before he can get any further, James and his boys enter with baseball bats.

James makes an offer to John, who refuses it with his customary gusto and pretty soon he's being worked over by the yobs. Before they can kill him, however, Epiphany enters carrying a pistol. She walks John out of the building safely and back to his pad. John calls up Faeces and says his activist days are over, which Epiphany rips the piss out of him for, before saying she's off to meet Carl and the other Vicious punks. John lets her go, recognising that she's just trying to make him jealous.

And elsewhere, James reports back to his fly-covered bosses and says that Viper has been dealt with - permanently. The lead figure says that the Vicious will also have to go, and leans into the light, showing that his face is mottled, dead and rotten...

Retrieved from "https://hellblazer.fandom.com/wiki/Hellblazer_issue_265?oldid=7135"
Community content is available under CC-BY-SA unless otherwise noted.