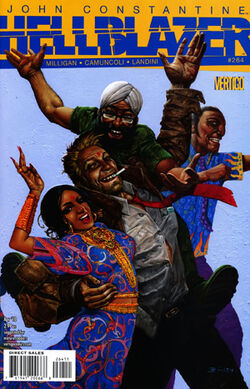 Hellblazer #264 April 2010). Horrible murders and bizarre incidents are springing up all over Mumbai as Colonel Burke begins his rampage. And the only man who can stop it all, John Constantine, is busy getting beaten up by the police...

As a series of bizarre and terrifying events grip Mumbai, officers Dev and Singh question John Constantine with extreme prejudice. As John gets his breath back from another beating, Dev asks him why he's here, since they don't actually believe he killed the girls. Constantine says that he's trying to attain purity and the cops laugh at the thought of him finding it in Mumbai. Back in John's hotel room, Epiphany looks thoughtfully at the Burke-summoning bindi paste.

Meanwhile, Charles makes an attempt to contact Burke to gain his favour, but the demon - taking the form of a giant composed of street litter - brutally murders him instead.

Back on the street, The Sadhu explains to Epiphany how this is his fault - how it's possible that Kali Yuga, the age of the demon, has been here for 5,000 years already and that by putting the curse on Burke he allowed the colonel to tap into that dark energy. Epiphany tells him to buck his ideas up and the old man sets off to tackle the problem directly. He finds Inspector Dev at a local picture house, where the audience has mauled each other to death, and says that the murders are another sign of the demon. He adds that Constantine's soul is too corrupted to be purified but that Dev's still has some hope. Dev asks what he means and The Sadhu says that if he helps save the city he may yet achieve purity.

The help in question involves freeing Constantine, who heads back to his hotel to find Epiphany mixing up something potent for the demon. She says that she found out from Burke's great-granddaughter that the reason he didn't come to Constantine when he had the bindi paint on was that he's a coward, and has been ever since he lost his nerve during the Sepoy rebellion of 1857. He was even presented with white feathers, a symbol of cowardice. But this time around Epiphany's concentrated the paint's potency and created something that will compel him to come whether he likes it or not.

Later, Constantine and Epiphany head out with the paint on their faces, and Burke turns up as expected. John casts a holding spell but Burke is now much stronger than he was and it doesn't last long. Burke picks John up and tries to tear him apart but Constantine's will is too strong. Epiphany manages to distract Burke long enough for John to transform a rag into a white feather, which he thrusts into Burke's face. Confronted with his own history of cowardice, Burke falls apart and the souls of his victims are released into the afterlife.

With the demon defeated, John demands to speak to Phoebe again. The Sadhu summons her into Epiphany's body and John tearfully confronts her. He promises to bring her back to life but Phoebe's spirit tells him that what he's doing is unnatural - that it's not fair for him to bind her to Earth like this. She begs him to release her and then her soul departs Epiphany's body altogether.

Back at his hotel a despondent Constantine explains to Epiphany that he's just received a call from Chas telling him that the lovesick Julian has confessed to Phoebe's murder to get John off the hook. With Phoebe having moved on there's not much to keep John in Mubai any more, so he decides to head back with Epiphany - though he admits to himself that he's only 80 per cent sure that Epiphany wasn't lying about being possessed. As the pair fly back to Britain, Dev and Singh move on to their next case.

Retrieved from "https://hellblazer.fandom.com/wiki/Hellblazer_issue_264?oldid=9478"
Community content is available under CC-BY-SA unless otherwise noted.