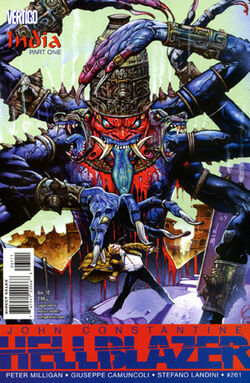 Hellblazer #261 January 2010) John heads to India, hoping to purify his soul so that he can resurrect Phoebe. But a mysterious shaman and a murderous demon have other plans.

The issue opens in Mumbai in the late 18th century, as Burke, a colonel in the British army, drunkenly bemoans what the 'damnable country' has done to him. As he rants at a painting of Queen Victoria, it emerges that he has just raped and murdered a young Indian woman. Behind him, an old mystic-looking man, The Sadhu, enters the room. He uses his power to pin Burke beneath the painting before unleashing a dark spell upon him.

Hundreds of years later, Constantine walks through the streets of modern-day Mumbai on a quest for purity. He buys some food from a vendor who looks suspiciously like the man who destroyed Burke before heading on to his hotel.

Elsewhere in the city, a terrified young girl is fleeing a demonic force. She asks a young boy to help her but he is powerless to stop the creature from tearing her apart.

The following morning Dev and Singh, a pair of police officers, are inspecting her corpse. She is the 13th victim of the creature but the distrustful locals refuse to help the police out in any way. At a loss, Dev orders that the girl be marked down as an overdose victim and that her wounds be blamed on the city's rats. Singh protests, but Dev says that the order has come down from on high: the movers and shakers of the city don't want reports of a serial killer getting out. Before they leave, Dev spots the boy from the previous night, but the terrified kid flees before he can speak to him.

Meanwhile, Charles Pankhurst-Hawke, a guru, has had his latest class ruined by Constantine's sudden appearance. John asks Charles to help him purify his spirit, but turns down his suggestions of casting off his Earthly goods and helping the sick and needy. Charles says that John can't be helped - that even his quest to bring Phoebe back is driven by his ego - but Constantine threatens to reveal the real reason why Charles was kicked out of Eton college and he relents. He puts a bindi on John's forehead and tells him that he'll be in touch.

A bindi is also being applied to the forehead of Meeta, a beautiful young English-Indian girl who's hoping to become a big Bollywood star. The man applying it is Vikram Dhawan, a film director who's just cast her in his latest movie. In the taxi home she calls her friend Daksha to tell her the good news, but adds that she felt an icy chill following her when she left the building...

And back in that same building, the smitten Vikram is mooning over Meeta's picture when Charles calls him up. He warns him that if John starts sniffing around their operation they could be in serious trouble.

Later that night, Vikram is up on the roof of a building, where Colonel Burke's painting of Queen Victoria hangs over a shrine. He pours a cup of tea for the colonel, whose voice seems to come out of thin air. Vikram begs the ghostly colonel to deal with Constantine, promising to bring him another young woman, and the spirit agrees... but only if Meeta is given to him.

Constantine is lost in thought when Colonel Burke catches up with him. John demands he show himself, which turns out to be a terrible idea as Burke appears before him in the form of a giant blue demon...