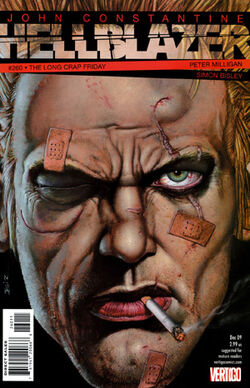 Hellblazer #260 December 2009) All John wants to do is get to India to help free Phoebe's soul, but gangster Terry Greaves has other ideas.

With Epiphany still unconscious after the events of Hellblazer issue 258, Terry Greaves is very angry indeed. He demands that John Constantine be brought to him. But that's not the only trouble John has at the minute: the police are after him for Phoebe's murder.

John goes back to his flat to grab his little black book, which has the details of a man who can help him, when two of Terry's goons come crashing up the stairs. Constantine quickly whips up an illusion to make them think that he's already dead and rotten, then slips off to Chas's when they're gone. Terry's understandably annoyed that Constantine's slipped his grasp, but demands his boys shake things up anyway by bombing Constantine's current local, The Granby.

The owner of the bar, Dottie, tells John that Terry's men were asking about for him before the bar blew up and says that next time she'll tell them Chas is involved as well. Hoping to nip things in the bud, Constantine heads to Terry's mansion under cover of nightfall, but is scared off by his dogs.

The next day Constantine is kitted out with a new passport courtesy of an elderly forger named 'Plates', and explains that he's off out of the country to help bring Phoebe back to life. But just as he gets to passport control to board his flight to Mumbai he gets a call from Chas, who's been captured and beaten by Terry's men. Chas says they're threatening to kill him unless Constantine shows up. John tries to leave regardless, putting Phoebe over Chas and knowing what kind of friend that makes him, but the passport is deemed suspect by the official and John legs it.

Pretty soon he's at Terry's place. Chas is released and John is led into the house for a severe beating followed by a ghastly murder. Before Terry can bring his axe down on Constantine, however, John offers to bring Epiphany back - adding that he tried to do that the other night but Terry's dogs woke the street up.

The problem is that John's not entirely sure whether or not he can fix her at all. He psychically leaps inside her mind and finds himself in her bedroom, faced with a young girl version of Epiphany. She explains that in her dream she's happy because it's always 1996, the year before her father sent her to alchemy school. John begs Epiphany to leave with him but she refuses and sends him back alone.

However, as Terry and his boys drag John away to be turned into meat pies, Epiphany comes around. Terry is beside himself with glee and lets John go - and Epiphany shoots him a look to show him that she's the one in control this time.

Later that day, John - covered in bandages and plasters - gets another passport from Plates and gets ready to hit Mumbai. His mission: to attain enough purity to bring Phoebe back.

Retrieved from "https://hellblazer.fandom.com/wiki/Hellblazer_issue_260?oldid=7149"
Community content is available under CC-BY-SA unless otherwise noted.