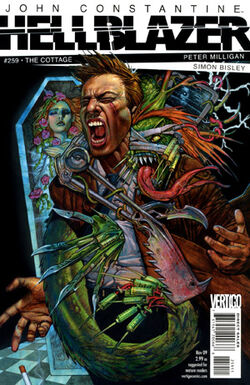 Hellblazer #259 November 2009) sees John Constantine spending a nasty night in a countryside cottage while trying to commune with Phoebe's spirit.

Chas drops John off at a cottage in the countryside, warning him that it belongs to his wife, Renee, and that he'd better leave it in good condition. Constantine agrees and goes inside to set things up for a ritual summoning. However, something about the summoning goes wrong pretty early on, and instead of pulling Phoebe to him, he finds himself pulled back into his own memories.

When he opens his eyes he's in a nightclub in Chelsea in 2007. He's failed to chat up a goth-looking girl and is in the middle of urinating in the gents' toilets when her friend, Phoebe, walks in. Constantine had previously written her off as being too middle-class and boring but pretty soon they're having passionate sex in a toilet cubicle.

Afterwards they step outside and she explains that she's just walked out of her engagement party. Something about Constantine's wildness just drew her in. Constantine tries to warn her off by telling her about the dangers of his magical lifestyle but she demands to know more. They kiss again and Constantine puts a little bit of magic into it - enough, perhaps, that he somehow put a spell on both of them. Only when he's stopped kissing her does he realise she's transformed into a demon. The crazed creature, all hypodermic needles and serrated bonesaw blades, chases him out of his memory and into somewhere darker.

Back in London, Chas and Renee are eating breakfast when Renee notices John's picture in the paper: a report about Phoebe's murder that fingers him as the killer. Renee says that he should be locked up. Chas, of course, disagrees.

Constantine comes to in the club's toilets. But this time it's not a memory or a flashback, and the scenery is all wrong: decayed and decrepit and foul. Constantine realises he's in Hell but thinks that Phoebe's soul couldn't possibly be there. He opens the cubicle door, but instead of finding her he finds an old acquaintence, Kathy George, who's trapped in the cubicle with the man who killed her parents. Kathy says that Troy is telling her how he killed her parents over and over again, and tells him to shut the door because he can't help her 'yet'.

As the Phoebe-monster snakes its way out of a toilet to get John, he activates a magical locus that he'd left behind outside the cottage and is pulled back to Earth. Unfortunately the monster comes through behind him and chases him into the cottage, smashing through a wall and destroying the living room. Constantine pulls out a binding spell and the creature transforms back into Phoebe. John realises that his actions have bound her soul to Hell as she disappears into the floorboards. With the cottage burning behind him, Constantine walks home.