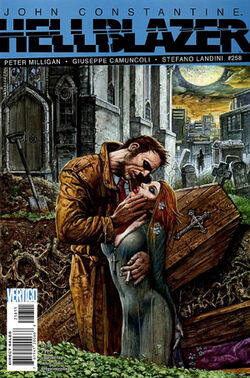 Hellblazer #258 October 2009) is the final issue of the three-part 'Hooked' storyline. Phoebe is dead, John is on the run and Julian is still out there...

John arrives at Phoebe's place too late. She is dead and her room if covered in blood, though her body is unmarked. He grabs some herbs from the kitchen to whip up a spell that will stop the decomposition process but when he comes back he finds Aisha there, hysterical and blaming him for the murder. He shoves her out the door as she calls the police, then strips Phoebe for the ritual. By the time the cops have busted through the door, John has vanished.

Where he's vanished to is Chas's garage. They share beers and commisserations, and Chas wonders why John bothered to stop her decomposing. John explains: he's going to bring her back.

His first stop is Epiphany again; she agrees to help Constantine just as her father, Terry Greaves, arrives. He accuses Constantine of trying to seduce his daughter and, knowing that Epiphany's feelings for him would make him a target, John quickly says that he made a pass at her and she turned him down. He then makes a quick exit.

Outside, Epiphany picks him up in her car and says that she can give him the right concoction but warns that it must be used by the pure of heart, otherwise they'll be driven completely insane. Constantine says it won't be a problem.

Phoebe is buried in the family graveyard by her father, who used his connections to get the body released early, and as night falls Epiphany and John come out with shovels, ready to do their work. Epiphany is worried about the 'pure of heart' clause, but Constantine suggests that all he needs to do is give the appearance of purity. John asks why she's helping him and she says it's the only chance he'll get to realise that Phoebe was a real person and not the perfect saint he's built her up to be in his head.

Epiphany sprays him with the potion, but things go awry when everyone in the cemetary but Phoebe gets up. Epiphany blames John's impurity while John blames her for spraying the potion about too much. One of the zombies grabs Epiphany and kisses her until John decapitates him with a shovel. He finishes off the rest of the graveyard's inhabitants, but when he comes back to Epiphany he finds that she's sunk into some kind of magical coma.

John spends the rest of the night burying the corpses and waits for Chas to pick him and the still-unconscious Epiphany up.