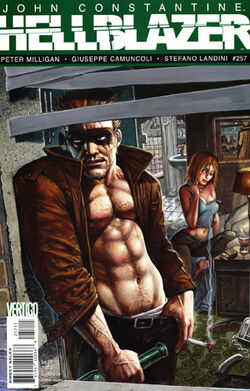 Hellblazer #257 September 2009) continues the three-part 'Hooked' storyline. John's plan to get both Phoebe and Julian to fall in love with him backfires horribly.

As Constantine has sex with the newly pliant Phoebe, Julian wanders a local hospital leaving long, lovelorn messages to Constantine. He hangs up just as he reaches the private ward where the teacher he attacked is recuperating...

Back in the bedroom, Constantine is making his excuses to leave, but Phoebe is pestering him with post-coital worries: was the sex good enough? Should she make him some dinner sometime? When can they meet again? John hurriedly makes his excuses and leaves, and the moment the door slams shut Phoebe calls Aisha, who's analysing the wine he gave her and coming up blank. She says it's probably a date-rape drug and advises Phoebe to steer clear of him; Phoebe says that she and John only had coffee together, that's all.

Back at his flat, Constantine's starting to get serious cold turkey problems from not using any of Julian's skin, but his day is perked up when he hears Julian's lovesick answerphone message. He heads straight over to Julian's, where the demonic bodyguard Alu sets to work on him. Luckily Julian intervenes in time. Alu says that John means Julian harm, but Julian says he doesn't care and drags John in.

Inside, Julian explains that he mimicked John's voice to get his number from Chas, who's in the phone book. He then says that he wants Constantine to marry him, and in return he'll elevate him from 'a talented street sorceror into a real master of the hidden'. Constantine's briefly tempted, but turns down the offer in the bluntest way possible: by flicking a lit cigarette onto Julian's collection of old skin. It goes up immediately, and while the demon is distracted John slips out of the building.

He then heads over to Epiphany's, hoping that she'll whip up a cure to his addiction. She's got no idea how to help him, but suggests that a spot of casual sex might help. John turns her down and, upset, she asks what's wrong with her body. John says nothing, but that he's devoted to Phoebe now.

Phoebe herself is not remotely feeling the same way. She sits Constantine down in his office and says that she's rumbled his plan with the wine bottle - and that she didn't drink a drop. In fact her whole post-coital conversation was faked. Constantine's appalled and surprised that she slept with him even though she suspected him of dosing her, but their conversation is interrupted by Aisha, who's furious on her friend's behalf. Constantine tells Phoebe that it wasn't a date-rape drug, that the potion was meant to make her love him, and leaves.

But she doesn't leave him. In fact, she sees him through four days of Hell as he comes down from his addiction to Julian's skin. Just as he's broken through, though, he gets a phone call from Chas, who says that he's in some kind of trouble at The Granby. John's halfway there when he realises that the voice on the phone wasn't Chas at all, but Julian mimicking him. He yells at the taxi driver to turn the cab around but it's too late: Phoebe is already opening her apartment door for Julian...

Retrieved from "https://hellblazer.fandom.com/wiki/Hellblazer_issue_257?oldid=7157"
Community content is available under CC-BY-SA unless otherwise noted.