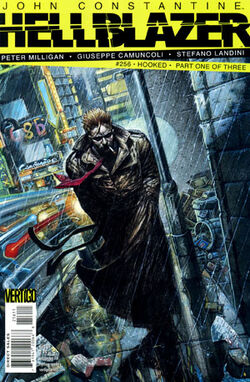 Hellblazer #256 August 2009) begins the three-part 'Hooked' storyline. John hatches a horrible scheme to get Phoebe back, but first he needs to deal with a crippling addiction to Julian's dead skin.

John's left London for Essex to get in touch with Epiphany Greaves, daughter of London mobster Terry Greaves. Terry put his daughter through alchemy school when she was a kid, correctly assuming that the skills would help him keep control of his patch of London's criminal underworld. But John's not there for family business, he's there for a love potion, which Epiphany duly cooks up. She tells him that the potion, mixed with a short ritual involving a little of Epiphany's hair, is all John needs to get them back together.

John gets to work injecting the potion into a bottle of wine when he's struck by another seizure, like the ones he'd experienced in the previous issue. He realises this time, though, that it's the result of going cold turkey on Julian's skin and rues his decision to deal with the demon.

Julian, meanwhile, is still disguised as a little girl at a local school and is goading his human 'friends' to gouge out a cowering girl's eyes. Before she can do so, however, a teacher walks in and interrupts their game. She tells Julian to go see the headmaster and the demon, infuriated, sprouts long talons and slashes her face to shreds.

Later, as Phoebe and Aisha are having a girls' night in, John comes knocking at her door with a bouquet of flowers and the tainted wine. He gives her the bottle as a peace offering, grabbing a hair off her shoulder for use in the ritual later.

But John's problems aren't over yet: he's still got an addiction to Julian's skin to deal with. After a tussle with Julian's supernatural bodyguard, Constantine finally meets with Julian, who says that he wants Constantine to be his slave - and that his first job will be to dissuade his teacher from testifying against him in court, as it would undo all his hard work at the school. Constantine, apparently infuriated, launches himself at Julian and begins choking him, only backing off when Julian threatens to call up his bodyguard again.

But it's a ruse - Constantine's yanked out a bit of Julian's hair, and as the demon goes off to get his new 'slave' some more skin Constantine injects some of Epiphany's love potion into his brandy decanter.

Back at home, John gets two calls - a flirty one from Epiphany followed by another from Phoebe, who says that she can't stop thinking about him, and that maybe they could work something out. Pretty soon the two are kissing on the couch, but John begins to have a crisis of conscience and heads to the bathroom, where he wonders just how much of a bastard he really is...